アジア経済研究所>出版物・レポート>レポート・報告書>アジ研ポリシー・ブリーフ>Youth Employment and the COVID-19 Pandemic in Ethiopia: Preliminary results of the tracer surveys of TVET graduates

No.148 Youth Employment and the COVID-19 Pandemic in Ethiopia: Preliminary results of the tracer surveys of TVET graduates

The COVID-19 pandemic has had negative impacts on economic activities worldwide, and they are more severe for people with fragile employment. In Ethiopia, a low-income country in Africa, the government declared a State of Emergency (SoE) in April 2020, soon after the first infectious case of COVID-19 was reported. The SoE contains restrictions on economic activities, including international and local movement, banning meetings of more than four people, and halting the operation of restaurants. It also prohibited layoffs in the private sector, but World Bank surveys reported that 16% of workers lost their jobs in April (World Bank 2020). Therefore, employment may be more adversely affected after the termination of the SoE in September.

Youth may be the most affected population, since they suffer from lower employment quality and a higher percentage of working poor, compared to seniors. Given the large youth population, it is an important question how youth employment has been affected by the pandemic in Ethiopia. Based on the original surveys of young graduates of vocational institutes (TVET) in Addis Ababa, we explore changes in employment and earnings among youth after the pandemic.

The surveys were initially designed to collect labor market performance of TVET graduates in Addis Ababa. All the applicants to the national skill assessments in ICT and Automotive for level 1 and 3, from 2016 to 2017, who registered in the two branches, were interviewed in May 2019. We interviewed them again in November 2020 and collected employment status in February 2020, immediately before the pandemic, as well as one in November 2020. Thus, we constructed the three rounds of data, which contain 930 samples in each round. The average age is 25.5 years old, and 95% were between 19 to 34 years in 2019. Females make up 41.8% of the sample, and 63% are ICT applicants.

Our samples represent the better-educated individuals in their generation, of which majority halted schooling before enrolling the secondary education. They were more likely to gain employment than graduates of lower-secondary education, and in fact, 87.5% of them were either employed or self-employed in February 2020. Their actual earnings rose by 7.9% between May 2019 and February 2020, immediately before the pandemic.

Employment and Earning Changes in the Pandemic Period

During the pandemic period (February to November 2020), 5.5% of employed or self-employed people lost jobs, which is only a slight increase from the pre-pandemic period (May 2019 to February 2020) when the job loss rate was 4.8%. Although the job-finding rate decreased for the unemployed, the overall employment rate decreased only slightly to 86.0% in November 2020. There was little change to the composition of wage-employment and self-employment.

Real earnings for those who stayed employed, decreased by 13.6% during the pandemic period (Fig. 1). However, the reduction is more significant among self-employed workers, with −20.4%, than wage-workers, at −12.7%. The latter is almost identical to the inflation rate measured as CPI, suggesting that nominal wages were maintained on average. There were few changes in working days and hours.

Sectoral heterogeneity among wage-employees is relatively small, with smaller changes in the finance, health, and construction sectors, while it is larger among self-employed workers. Self-employed workers in transportation, manufacturing, and other services (incl. restaurants) were hit harder (Fig. 2). 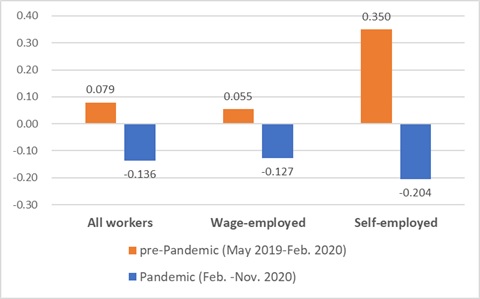 NOTE: Growth rates over the samples who stayed employed during the periods.

These changes appear consistent with the SoE that banned layoffs and restricted services in transportation and restaurants. However, the SoE was terminated about two months before the survey, and the terms did not bind firms. Given minor changes in working hours, most firms and small businesses are likely to maintain employment for skilled workers in November 2020. 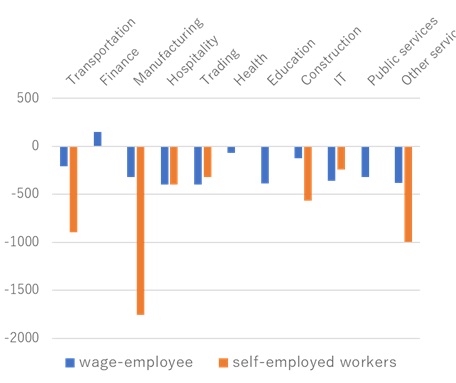 NOTE: Figure represents the median of wages changes by the industries in which more than five samples work.

The recent studies reported substantial gender gaps in the impacts of the COVID-19 on employment. In our samples, there were significant gender gaps observed among the young TVET graduates before the pandemic; strikingly, the average earning of female workers is lower by 25.1%. In the post-pandemic period, the employment rate changed little for both genders. However, female wages fell by 17.2%, while male wages dropped by 11.6%. Although the difference in growth rate is not statistically significant, the average wage gap had grown to 31.6% in November 2020 (Fig. 3).

Despite general concerns, our survey indicated that women are not more likely to leave a job or turn to part-time work for their families during the pandemic. But they may have experienced difficulty in full-time work, which led to the significant fall of wages. 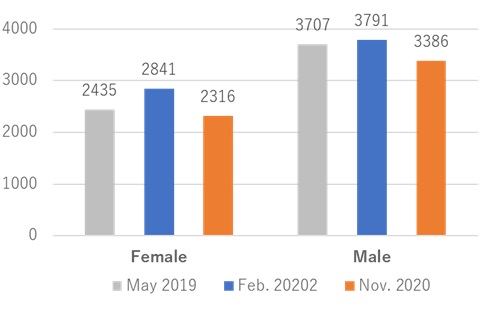 Young workers were asked to evaluate present and future life subjectively. Evaluations differed by employment status: nearly 60% of those employed were satisfied with their present life, while only 40% of unemployed individuals were content. For future life, young workers were more pessimistic; less than 30% of them replied feeling hopeful, regardless of employment status (Tab.1).

In Addis Ababa, youth employment after the pandemic was not seriously affected, on average. Even after the layoff ban ended, job loss only increased slightly for both wage-employed and self-employed workers and both genders, suggesting that many firms and workshops made their own decisions to maintain employment. These results contrast with early surveys by the World Bank, presumably because our sample is better educated, though younger.

However, there is heterogeneity in earnings changes, with a more significant fall among self-employed workers, particularly in transportation, manufacturing, and other services, including restaurants. Unfortunately, female workers experienced a more considerable fall in earnings than male workers, which increased the gender wage gap.

Lastly, majority of young workers are concerned with their future.

NOTE: Figures represent a fraction of the respondents who chose 5 or 4 from options ranging from 1 (Extremely unsatisfying/hopeless) to 5 (Extremely satisfying/ hopeful).

The surveys were conducted in collaboration with the Addis Ababa Occupational Competency Assessment and Certification Center. This study was financially supported by JSPS KAKENHI (18H00857 and 18H03621).

The views expressed in the document are those of the author(s) and neither the Institute of Developing Economies nor the Japan External Trade Organization bears responsibility for them. ©2021 by author(s) No part of this publication may be reproduced without the prior permission of the author(s).

This policy brief is partly based on the following paper.

Takahiro Fukunishi, "Youth Employment and the Pandemic of COVID-19 in Addis Ababa: Preliminary Results from the Original Surveys of TVET Graduates," Africa Report, No.59, 2021 (in Japanese)