Institute of Developing Economies>Papers & Publications>Reports>Spot Survey>Public Policy and Transformation in South Africa after Democratisation No.33

Public Policy and Transformation in South Africa after Democratisation

by MAKINO Kumiko , and SATO Chizuko

It is almost two decades since the apartheid regime ended and a democratically elected government was born in South Africa. As its international isolation dissolved, its presence in the global economic and political arena has increased. South Africa is now regarded as an emerging power in the twenty-first century. When we turn our eyes to the internal situation, however, there are huge challenges remaining for socio-economic transformation in South Africa.

Ever since the founding elections in 1994, the African National Congress (ANC), with its historical credentials as the leading liberation movement against apartheid, has continuously enjoyed majority electoral support and has led the government. Under ANC rule, millions of black South Africans, whose poor living condition were largely ignored by the apartheid government, gained access for the first time to formal housing, electricity, clean water, and so on. However, such achievements have never risen to the level of people's expectations. In recent years, there have been an increasing number of protests and strikes by those who are dissatisfied with the slow progress of change. These have sometimes led to violent clashes with the authorities. A most tragic incident took place recently at the Marikana platinum mine, where 34 striking miners were shot dead by the police on 16 August 2012. Disgruntled people also tend to find immigrants from other African countries easy scapegoats; the worst incidents of xenophobic attacks were observed in 2008 (Hassim et al. 2008).

Needless to say, these challenges are historically rooted, and will naturally take time to overcome. However, it is no longer enough to just blame "the legacy of apartheid" for the current situation. This collection of essays aims to explore the relations between public policy and transformation in South Africa since democratisation. In the following chapters, we will trace the trajectories of several important public policies under the ANC government since its inception in 1994, and analyse what impact they have had on the South African economy and society. 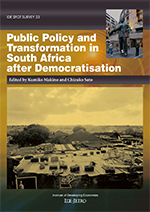