Promoting 3Rs in developing countries —Lessons from the Japanese Experience—

In 2004, Japan’s then Prime Minister Koizumi proposed the “3R Initiative” at that year’s G8 summit. The initiative was officially launched at the Ministerial Conference on the 3R Initiative in April 2005 in Tokyo, where the Japanese government announced “Japan’s Action Plan for a World-Wide Sound Material-Cycle Society through the 3R initiative (Japan’s Action Plan to Promote Global Zero-Waste Societies).” The action plan includes activities for “Cooperation with developing countries for promoting zero-waste society” and “Promotion of international cooperation for realizing world-wide zero-waste societies.”

International cooperation programs in the field of 3R have also been started.Although recent efforts by Japan regarding 3R have been shared with the international community, not everything will be applicable to other countries. It is therefore important to review the Japanese experiences from the view points of priority and applicability in developing countries, which this report sets out to do. It provides an examination of Japan’s experiences with 3R, with a special focus on recycling, in order to clarify how developing countries can benefit from them. However, the success or failure of a policy largely depends on the social and economic circumstances in the country in which it is implemented. Some 3R policies cannot be implemented unless specific societal conditions are already in place. This report tries to point out such conditions. 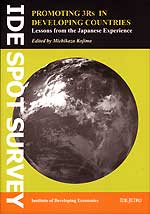 A Comparative Study of E-waste Recycling Systems in Japan, South Korea and Taiwan from the EPR Perspective: Implications for Developing Countries / Sung-Woo Chung and Rie Murakami-Suzuki