What happens when a country has more debts than it can manage? 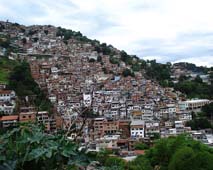 With the aim of stimulating economic growth, governments and enterprises of developing countries, in the face of tight financial and monetary constraints, resort to various fundraising measures, including the issuing of local/foreign currency-denominated bonds, aids (loans) from development organizations and developed countries, and borrowings from private financial institutions. Since the 1980s in particular, the global trend toward financial liberalization has led to a diversified financing measures for developing countries. However, the redemption and/or principal and interest repayments have not always taken place on schedule. As a result of endogenous problems such as the vulnerable tax base, or exogenous shocks such as falling prices for foreign-currency earning products, natural disasters and currency and financial crisis , which the governments cannot control by themselves, countries often face solvency problems and go into default (This situation is also called a "debt crisis").

For creditors, default means a low recovery rate and a deterioration of business performance, while for debtors, it invites many problems that cannot be overlooked, ranging from difficulties in financing the immediate repayment to rising funding costs for future development (in the worst case, financing may become totally infeasible). In the latter half of the 1970s, when the problem of debt accumulation surfaced, the cause was deemed as a temporary liquidity shortage on the part of the debtors, meaning the developing countries. Then, in the latter half of the 1980s, the debt accumulation came to be recognized as a structural problem stemming from an insufficient economic performance for making repayments, and the international community started discussions to address this problem. Given these circumstances, with the support of the IMF and World Bank, the Baker Plan (1985) and the Brady Plan (1987) were compiled. The Baker Plan consists of the following solutions: (1) rearranging the principal and interest repayments to a sustainable schedule (rescheduling) or (2) forgiving part of the principal and interest repayment (haircut), obligating the creditor group to act in a uniform manner. The Brady Plan, in addition to (1) and (2) which may require a lengthy process for creditors to reach an agreement, offered the idea to (3) securitize the debts and sell them to investors willing to take high risks (securitization). These plans have been applied to Latin American and South East Asian countries. Most of the countries affected by the Asian currency and financial crisis in 1997 used the securitization scheme (e.g., Asset Backed Securities) to write off the bad debts of public and private enterprises.

The debt problem also has internal impacts in addition to the external problem of repayment. The purpose of development finance per se should be to improve the economic strength and people' s welfare and reduce poverty (related themes: economic growth, poverty, inequality), but in reality, heavily indebted poor countries (HIPCs, e.g., most African countries) have not established a good track record of making improvements in either debt or poverty reduction. Past studies have shown that in a debt crisis, the poorest people living in precarious conditions are hardest hit. Given this situation, the IMF and World Bank launched the HIPC Initiative in 1996. The scheme, which was designed to reduce the debts of HIPCs that met certain criteria to a sustainable level, was implemented in collaboration with the governments and private creditor organizations. By June 2009, debt reductions under the scheme including interim debt relief were approved for 35 countries. Further, in order to expedite debt relief for HIPCs by international organizations, an idea that was incorporated as one of the Millennium Development Goals (MDGs), the Multilateral Debt Relief Initiative (MDRI) with a similar scheme was launched in 2005 through the G8 agreement in Gleneagles. A total of 26 countries including non-HIPCs were given debt relief from the IMF, IDA and African Development Fund (as of June 2009), and 16 more are scheduled to receive debt relief. In the aftermath of the worldwide recession in 2007, similar relief measures have been considered among the Inter-American Development Bank and other international organizations.

Now, what are needed to prevent debt crisis and/or reduce the heavy debt burden? From the viewpoint of development economics, the above-described countermeasures on the expenditure (spending) side, e.g., reducing debts per se, as well as improving revenues (income), i.e., stabilizing the monetary (fiscal) base and controlling outstanding obligations, are important subjects of analyses. From the latter half of the 1990s in particular, “debt and poverty reduction that can promote economic development,” which was incorporated as one of the MDGs, and the “contingent liability” issues that derive from the privatization of public enterprises (or its failure), which was promoted in the 1980s and subsequent years as part of the structural adjustment, have been capturing attentions. Efforts are also being made to develop indicators to quantify various debt-related risks that governments have to control, in order to enable them to prevent debt accumulation from exceeding a sustainable level.