The objective of this study is to provide a comprehensive understanding of the changes in Brazil that occurred from the last decades of the 20th century until after the 2014 presidential elections. In this period, Brazil succeeded in implementing a number of important reforms in various areas and emerged at the beginning of the 21st century as a constitutionally transformed nation. Brazil has been a consolidated political democracy since it shifted from military to civilian rule in the 1980s. The country achieved economic stabilization in the 1990s and subsequent high growth, reduced poverty and inequality, and increased its global presence in the 2000s. Some studies analyzing these remarkable economic, political, societal, and diplomatic reforms of the post-constitutional Brazil call it the "New Brazil" [Konta 2011]. Previous research by Roett [2010] and Fishlow [2011], both prominent scholars of Latin and Brazilian studies, can also be cited as representative examples.

The main points of these previous studies, which recognize Brazil as a newly transformed nation at the beginning of the 21st century, can be summarized as follows. Brazil, with an awareness of the globalizing world and the goal of increasing its global presence, enhanced its autonomy and diversity on policies and utilizable resources by continuously developing institutions in different fields. The starting point for the New Brazil was the Fernando Henrique Cardoso administration (1995–2002), but its solidification was fully realized under the Luiz Inácio Lula da Silva administration (2003–2010) [Konta 2013].

However, in June 2013 in the New Brazil which had been evaluated positively until that point, protest demonstrations suddenly occurred and spread throughout the country with more than a million participants. Through the protests, the various underlying discontent of the people smoldering under the label of the "New Brazil," such as the perceived wasteful spending of hosting the World Cup, the instability of public services, and distrust in politics, erupted in a single burst, and Brazil's socio-political climate became confused. Furthermore, the economy of Brazil was showing signs of slowdown and stagnation since the Dilma Rousseff administration began in 2011. Although Rousseff ultimately won reelection in the October 2014 presidential election, the people were polarized since she won by the narrowest margin in Brazilian history. Brazil's subsequent national climate, characterized by social contradictions exposed through nationwide protests and prolonged economic stagnation, can be called the "Post-New Brazil". 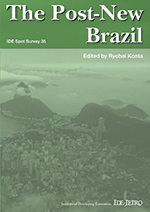 Democratization of Politics and the Post-New Brazil (592KB) / Kotaro Horisaka

A New “Order and Progress” in the Brazilian Economy (1.3MB) / Saori Kawai

Challenge to Develop a Social Security for All the People (1.0MB) / Ryohei Konta