The World Food Crisis and the Strategies of Asian Rice Exporters

From the end of 2007 to the middle of 2008, the world prices of major grains abruptly and drastically surged to unprecedented levels. The price of rice in particular rose much more quickly than other grains, such as wheat and maize, tripling within this very short period. Since rice is a commodity which is produced and consumed as a staple in many developing countries, the impact of the price hike was serious to the economic welfare of poor people.

Numerous articles concerning this unexpected “food crisis” have been published since 2008. Most of the literature discusses the causes of the price surge, the impact of the price surge, and the policy implications to prevent future crises. As for the causes of the rice price spike, there seems to be a common understanding that the export ban or restrictions by major rice exporters, such as India and Vietnam, and the panic purchase by major importers, such as the Philippines, pushed the price to this height.

However, the literature does not well address why India and Vietnam banned or restricted their rice exports. Although these countries could have gained by selling rice at higher prices, they restricted rice exports as if they were escaping from the price increase. On the contrary, Thailand, another major rice exporter, did not control its rice export at all. Rather, it implemented a price-support scheme for farmers, even though farm prices were double those of a half year before. Why did India and Vietnam restrict their exports? Why did not Thailand? To identify the causes that brought these different responses, we need to understand the preferences and conditions of each government in their policy choices. Focusing on these three major rice-exporting countries in Asia, this report identifies the salient features of the rice industry in the context of their economic and political conditions, and discusses how these factors affected the responses of each government in the midst of the international price surge. 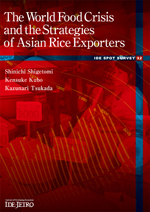 Rational Responses and the Stability of the Rice Market / Shinichi Shigetomi