December, 2013
PDF (716KB)
Since 2012, in cooperation with the United Nations Industrial Development Organization (UNIDO), the Institute of Developing Economies at the Japan External Trade Organization (IDE-JETRO) has analyzed the data on agri-food import rejections provided by the food safety regulatory authorities of major markets (Australia, EU, Japan, and US) and the results of the studies are published as Meeting Standards, Winning Markets – Regional Trade Standards Compliance Report – East Asia 2013 1 . The report provides a detailed look at trade standards compliance issues facing East Asian countries and offers policy suggestions. In the report, we give special attention to Vietnam, focusing on a case study on pangasius and shrimp supply chains 2 . 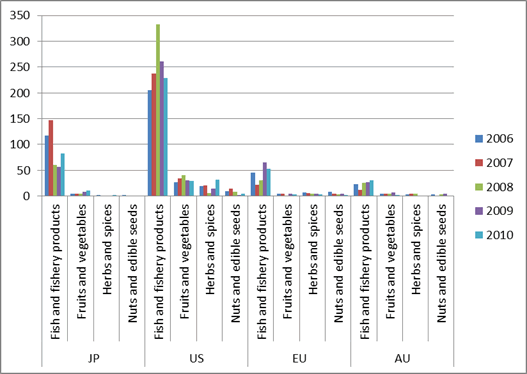 Issues facing seafood exporters in Vietnam
Vietnam was ranked as the fourth largest exporter of seafood in the world in 2010, with pangasius and shrimp as major commodities. Yet, in recent years, Vietnam has had difficulties meeting the regulations of importing countries. At Japanese ports, shrimp imports from Vietnam have been a major target of intensive inspection. Shrimp exporters are greatly concerned over this issue because it could jeopardise future export growth in shrimp.

The failure to meet Japanese food safety standards stemmed from the improper use of feeds, which points to a potential problem in the supply chain management of shrimp, especially at the early stages of shrimp culture. For the grown shrimp to pass inspection, the entire growth process must be well managed to avoid introduction of any banned or problematic substances.


Vietnam’s standards compliance capacities in fishery products seems weak
Among various agricultural commodities, fish and fishery products from Vietnam have incurred rather high rates of rejection relative to the overall number of rejections (see Figure 1), even when scaled by import value (see Table 1 ).

Table 1: Average rejections of fish and fishery products imports from Vietnam (per US$ million imports)
Source: UNIDO dataset and analysis, based on EU RASFF, US OASIS, AQIS, and Japanese MHLW data

Table 2: Reasons for import rejections of Vietnamese fish and fishery products in selected markets
Source: UNIDO dataset and analysis, based on EU RASFF, US OASIS, AQIS, and Japanese MHLW data

Policies to improve Standards compliance capacities in Vietnam
To improve trade standards compliance in Vietnam, four actions may be useful. The first is to make smallholder farmers aware of the existence of these standards and the certifications that are required in export markets. Second, a stricter domestic enforcement mechanism is needed to expand export opportunities to smallholder farmers. Third, it is important to regulate inputs such as agriculture chemicals, fertilizers, and feeds. Fourth, in addition to intensifying monitoring by local authorities, providing farmers access to public labs may also bring positive results by educating farmers about the condition of their products. If they can check the status of their fish themselves before sale, that will also give them more incentives to grow safer fish.