Institute of Developing Economies>IDE Research Columns>Columns>2022>Growth of the Fresh Fruit and Vegetable Export Industry in Developing Countries: The Case of Peru

Growth of the Fresh Fruit and Vegetable Export Industry in Developing Countries: The Case of Peru 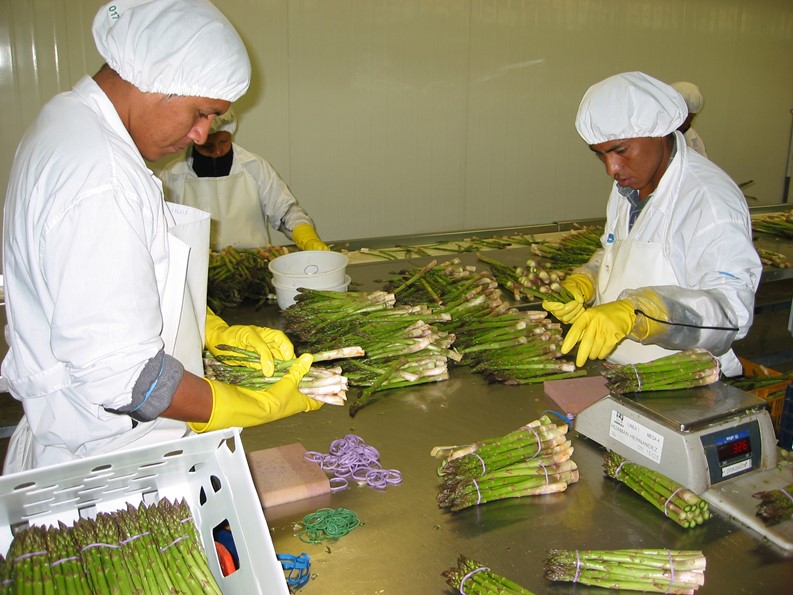 Peru is an emerging international exporter of fresh fruits and vegetables (FFVs), with exports expanding rapidly in the past two decades.FFVs are primary products that have little value-added. However, delivering high-quality FFVs to the market at the right moment can add value to these products. Creating value chains to accommodate demand was key to industrial development based on the export of primary products.
Counter-season production is necessary but not sufficient for Peruvian FFV exporters to be competitive. Individual efforts of Peruvian agribusiness companies combined with their collective actions to build the country’s solid phytosanitary capacity have made the country one of the world's emerging FFV exporters.

Throughout the year, a wide variety of fresh fruits and vegetables (FFVs) can be found in the world’s supermarkets. Some are produced locally, but others are produced on the other side of the globe and transported over thousands of miles.

In recent years, Latin American countries have been increasing their FFV exports to both developed and emerging markets. These exporting countries are located close to the equator or in the southern hemisphere. Therefore, they can supply FFVs to the markets in the northern hemisphere during the seasons when the northern local producers cannot harvest fresh produce—thus, taking advantage of counter-season production.

Mexico, Chile, and Ecuador are the principal Latin American FFV exporters. Mexico takes advantage of its warm weather and cheap labor to supply FFVs to the U.S. market. Chile pioneered the counter-season production of temperate fruits such as grapes and apples, while Ecuador is the largest banana exporter in the world.

The growth of the FFV export industry in Peru can be attributed to three main factors. The first is the entry of agribusiness companies into FFV production and the integration of their value chains from production to marketing. The second is the diversification of export crops by these companies to overcome seasonality and uncertainty in agriculture. The third factor is collective actions that transfer private resources to the public sector to improve its phytosanitary capacity, which is a public good.

From Preserved to Fresh Exports

Instead, Peru took advantage of counter-season production and started to export fresh asparagus during the 1990s. In 2002, fresh export surpassed preserved export in value, and the value increased rapidly for a decade (Figure 1). 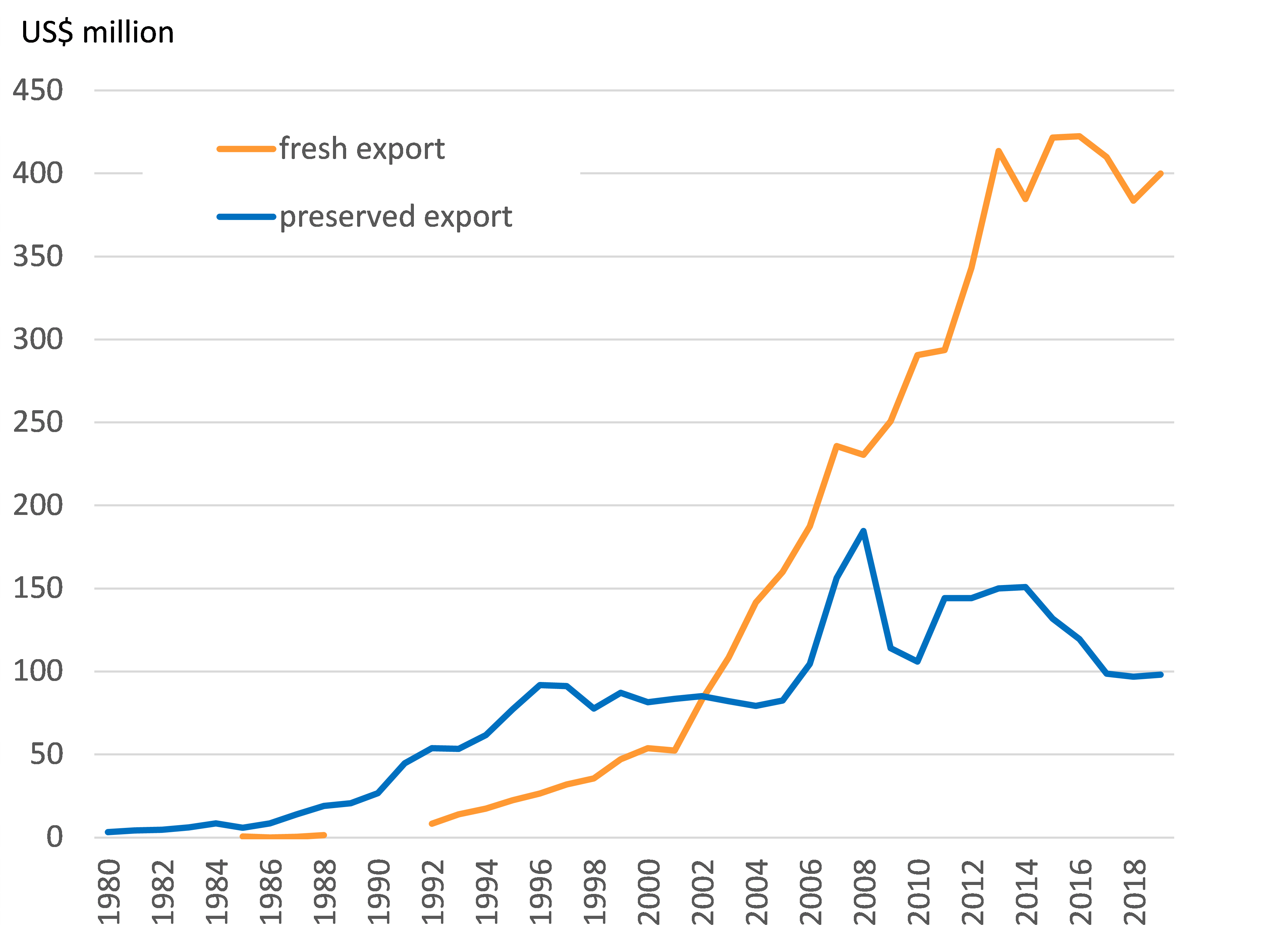 During the 1990s, the Peruvian government liberalized the agricultural land market and completed a large-scale irrigation project. Several national corporate groups took advantage of this situation by investing in agriculture and founding agribusiness companies. These companies acquired agricultural land and established large-scale corporate farms with packing plants. They also integrated value chains for FFV exports from production to marketing.

Although Peruvian fresh asparagus export expanded rapidly, dependence on a single crop brought some problems due to seasonality and uncertainty in agriculture. Permanent labor made it too costly for agribusiness companies to produce a seasonal crop. The agricultural machinery and packing facilities were also under-utilized during the slack season. Production and sales of a single crop could be uncertain due to weather anomalies, pests and diseases, and price fluctuations. Thus, seasonality and uncertainty made it difficult for agribusiness companies to expand.

To overcome these problems, agribusiness companies diversified their crops. They chose grapes, avocados, blueberries, mangoes, and citrus fruits (Figure 2). The busy seasons for some of these crops are different from asparagus, which helps the companies better utilize their labor force, machinery, and facilities.

Crop diversification also meant finding markets for the new crops. Because Peru was a latecomer to FFV exports, other countries had already supplied niche markets with counter-season production. Therefore, Peruvian agribusiness companies tried to find gaps among these markets. For example, Chile—one of the principal grape exporters in the international market—exports its produce from February to May. So, Peruvian companies export from November to January. In the case of avocados, Peruvian agribusinesses ship their produce to cities on the east coast of the United States, where Mexican produce is not abundant. By accommodating their value chains to market demand, they have diversified export crops and expanded their FFV export business.

Peruvian agribusiness companies solved this problem through collective action; they used industrial associations to transfer their resources to the public sector to improve phytosanitary capacity––a public good. For example, some associations helped the national phytosanitary authority finance the training and negotiations for their staff. They also provided materials so the national authority could conduct tests to show the effectiveness of phytosanitary measures in eliminating pests and diseases. With these collective actions, the country improved its phytosanitary capacity.

As a result of agribusiness company efforts, Peru is now an emerging Latin American FFV exporter. At the same time, the FFV export industry has become one of the most promising sectors supporting stable economic growth in Peru. Fresh fruits and vegetables themselves are primary products with little value-added; however, delivering high-quality FFVs to the market at the right moment can add value to primary products. Creating value chains to accommodate demand and upgrading Peruvian agribusiness companies’ activities within the value chains was key to industrial development based on primary exports.Developing countries with a primary export sector can learn from the Peruvian case to develop their industry. 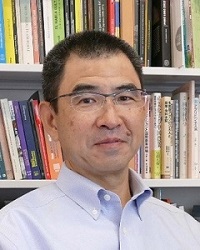 Tatsuya SHIMIZU is Director-General of the Area Studies Center at Institute of Developing Economies, Japan External Trade Organization (IDE-JETRO). He is a specialist in Latin America's economic development, focusing on the agricultural sector. Besides the fresh fruit and vegetable export industry in Peru, he has studied the development of broiler and potato value chains in Peru and the expansion of grain production in Argentina and Brazil.

Shimizu, Tatsuya. ed. 2021. The Next Generation of Agricultural Producers in Latin America. [In Japanese.] Chiba: IDE-JETRO.https://www.ide.go.jp/English/Publish/Books/Jpn_eBooks/eBook/202103_02.html

*Thumbnail image: A fresh asparagus packing plant in Peru. Author’s photo in 2005.
**The views expressed in the columns are those of the author(s) and do not represent the views of IDE or the institutions to which the authors are attached.