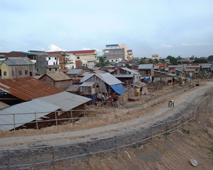 Houses on the banks of a river
in Phnom Penh, Cambodia

Social security systems protect people from social risks in their daily life and play central roles in welfare states in developed countries. The term "social security" was first used in 1935 in the United States’ Social Security Act, enacted under the Roosevelt administration. In the 2001 International Labor Organization (ILO) report, several models for social security are mentioned, including the social assistance scheme, universal scheme and social insurance and public/private funds (insurance). Nonetheless, we can understand that the central idea of social security is that it is comprised of social insurance and social assistance (this is very close to the narrow definition of social welfare in Japan). However, as indicated in the ILO report, there are diverse models for social security, so the term can mean different things depending on the country where it is used. We recommend referring to "Readings: Nihon no Shakai Hosho" (Japan's Social Security)" (Yuhikaku series; Edited by the Social Development Research Institute, 1992) for a better understanding of the concept and structures of social security.

"Social welfare," another pillar of social security, can be used to refer to the wider, general meaning of well-being, as used internationally, but it can also mean public assistance that includes social services for those who meet certain requirements, as exists in Japan. The latter usage is specific to Japan, and this concept is often referred to internationally as "social assistance" and "social services". It is mainly public bodies that have shouldered the burden of social welfare in the past, but in many cases, the family and the nonprofit and private sectors have also been seen to provide welfare support. This situation concerning welfare provision is referred to as a "welfare mix." The idea of workfare, whereby welfare recipients must be engaged in employment, has also gained force in recent years.

Up until now, social security systems have been regarded as systems that exist in developed countries, which developing countries have not been equipped for yet. It is clear, however, that social insurance systems and social assistance schemes do exist in developing countries. In particular, there are some countries among the NICs (Newly Industrializing Countries) whose institutional development has been progressing rapidly recently due to economic growth and political democratization. In the developed countries of Latin America, social security systems centered on social insurance have been in development since the end of the Second World War. On the other hand, in low-income countries, assistance for poor people is a main social security concern.

Just as there are differences in social security systems among developed countries, there are also special characteristics in those systems in developing countries and NICs. These characteristics - how they have come about and how they will respond to political, economic and social change in the future - and what type of social security systems they will become – these are issues that have yet to be explored.