Poverty - The origin and target of development studies 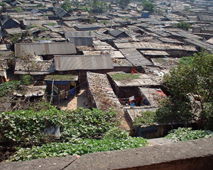 1. How we view poverty

When discussing poverty, the term "absolute poverty" is used when focus is on the living standards and basic needs in any given society. In contrast is the term "relative poverty", where the definition of poverty changes according to each society’s way of life and phase of economic development. "Vulnerability" is also a consideration these days, when a person does not have the means to protect him or herself from serious damage to livelihood and is weak to various risks, shocks and stresses. There is also emphasis now on "transient poverty," or poverty caused by short-term economic changes, as opposed to "chronic poverty," which is brought on by long-term problems in social and economic structures.

To determine what poverty is, there is a need to decide on what barometer for living standards will be used. In general, real consumption values are used. The poverty headcount ratio and poverty gap ratio are typical poverty indicators. More concretely, one method used is to look at the poverty line and basic consumer spending; that is, the amount of spending required for the amount of food necessary for basic energy intake plus basic non-food items. Anyone whose consumption level is below this is regarded as being among the poor. Reference is often made to the measure of a dollar a day per person as marking the poverty line. In this case, each country’s household consumption according to survey results is converted according to purchasing power parity so that the amount of goods that can actually be consumed is equalized. The ratio of the population that is earning (or consuming) an amount below the poverty line is the poverty headcount ratio. We can tell how big the population of the poor is according to this indicator, but we cannot tell how serious each individual’s circumstances are. With income transfers, the poverty headcount rate can easily be lowered by granting such payments to those whose income levels are not that low, and this may be preventing the poorest of the poor from receiving relief. In contrast with this, the poverty gap ratio expresses the amount of income the poor are lacking to make it over the poverty line, which is useful in order to grasp the severity of the problem. The poverty gap ratio is calculated as follows:

In grasping poverty by looking at consumer spending, emphasis is on the goods and services necessary for daily life. It is important, however, in understanding poverty to actually know about people’s being and what they are doing (what Amartya Sen refers to as "functioning") through goods and services. This is where social indicators such as health and life expectancy and literacy prove useful in understanding poverty. The UNDP’s Human Development Index (HDI) is one such indicator.

In the 1970s, when efforts to deal with poverty began in earnest, "Redistribution with Growth" (Chenery et. al. 1974) was proposed. The concept of Basic Human Needs (BHN) was also advocated at the 1976 ILO World Employment Conference. Under this view, it is not just growth that is needed to meet people’s basic needs; redistribution of wealth and institutional reform are also necessary. In addition to basic consumption, adequate food, housing, and clothing, BHN includes access to safe drinking water and public health, use of public transportation, medicine, education, employment and the protection of human rights. In the 1990s, interest in poverty relief was high, and having undergone structural adjustments in the 1980s and reconsidered the meaning of development aid, focus was particularly on institutions and governance, non-income related poverty (human rights and social exclusion), participation in the local community, and self-initiated public action (Drèze and Sen 1989) . Tremendous impact could be seen particularly in the 1990 and 2000/2001 World Development Reports and post-1990 Human Development Reports (UNDP) . World Development Report 2000/2001 considered poverty reduction by looking at three dimensions - encouraging opportunity, empowerment and social security to deal with risks that people face - and emphasized institutions and governance. Human Development Report is based on the concept of expanding people’s choices in life by promoting development policies that are people-centered. According to Drèze and Sen, included in poverty reduction and social security are promotional measures to consistently improve people's income and skills, and protective measures/safety nets to guard people in emergency situations (e.g. disaster and economic crisis) (Drèze and Sen 1989). This includes safety net measures and the provision of assets, as well as improvements to "entitlements" of low-income earners.

With the current emphasis on targeting (determining policy beneficiaries by looking at specific indicators) arise the issues of its effect on the information gap between government and society, administrative costs, and incentives. People who are not suffering from poverty also benefit if limits are not established, but a strict means test for beneficiaries greatens the administrative costs involved, thereby increasing the burden on the poor. There is also the use of variables closely correlated with income as relatively easy indicators to determine beneficiaries (area, ethnic group, gender of head of household, housing situation, access to resources such as drinking water). There is also "self-targeting", whereby a framework is created that non-poor will not fit into, leaving only the poor (by setting the wage levels in public job creation programs close to the minimum standard of living, those whose living standards are supported by more than minimum wage do not take part).

Inequality - Reducing inequality for a future of coexistence and cooperation 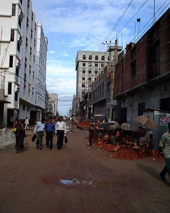 An industrial park in Narayanganji, Bangladesh

1. The Merits and Demerits of Inequality Debating the merits and demerits of inequality is surprisingly not easy. Inequality is not just about economics; it relates to many dimensions of human life (gender, generation, community, ethnicity, etc.) and there is no consensus as to which aspect of discrimination is more important than another. If we just take the economic aspect, inequality and growth are mutually related, and it is difficult to select distribution and growth promotion policies independently of each other.

2. Measuring Inequality A straightforward way to measure economic inequality is to look at the share of society’s income taken up by the high (or low) income population. Statistical measures such as the Gini coefficient and Theil index are often used in specialist research.

3. Economic growth and Inequality
Regarding the relationship between economic growth and income inequality, there was a hypothesis, the trickledown theory, suggesting that the results of economic growth will eventually permeate the poor segments of the population. Kuznets has argued, based on the historical experience of developed countries, that, “in the first stages of economic development, the gap in income distribution is large, but at a certain level of development, the inequality lessens" (Kuznets 1955). The most important aspects of Kuznets’ argument involve the gap between urban (industry) and rural (farming), and movements of labor and establishment of social security mechanisms. Kuznets’ theory also faced criticism, and it can be thought that by providing opportunities for the poor to participate in economic activity, the economic growth that comes with equality can be fostered. Examples include the provision of public goods by the government that support production activities of the poor and improving the functions of the credit and insurance markets to reduce risks faced by the poor. Human capital, such as health and hygiene and education are particularly emphasized as linking growth and inequality. Also, with parameters between economic growth and inequality (factors obstructing movement in the market such as segmentation in the labor market, technological disparity and poor quality of public institutions), it is possible to achieve growth and equality through correcting failures of the market and improving the quality of institutions. If we take political stability and social harmony under the wider meaning of public goods, aiming to reduce inequality by creating a social foundation that promotes these factors can also be included in the role of development policy. An equal social environment improves social efficiency by promoting the norm of reciprocity and cooperation, and there is also a perspective that considers this as “social capital” - a factor along with physical and material capital that contributes to growth.

4. New Developments in Measures to Reduce Inequality
The UNDP's Human Development Report aims to avoid conflict and social antagonism by calling for redress of the horizontal inequality of gaps in freedom and living conditions brought on by differences among people who belong to different genders, ethnicities, languages and religions, in addition to inequality from the one-dimensional perspectives of income and skills (vertical inequality) (Stewart 2000, pp.252-255) (Horizontal versus Vertical Inequality, UNDP 2000, p.62, Box 3.4). Human Development Report 2005 appeals for public policies to correct inequalities in working towards achieving the Millennium Development Goals (UNDP 2005, pp.55-64). Further, regarding the term “pro-poor growth” that has recently been the subject of focus, Human Development Report 2005 proposes that rather than the “absolute definition of pro-poor growth” (growth of income of the poor), the “progressive definition of pro-poor growth” (which emphasizes the relative status of the poor in a society) be used instead (UNDP 2005, p.65, box 2.3).