Towards victory over the vicious cycle of poverty and ill-health 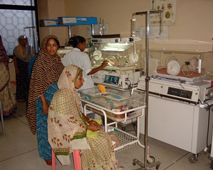 Although health is an essential and important issue for the progress of developing countries, the definition and goals of health tend to be seen as being somewhat amorphous.

According to the World Health Organization’s (WHO) definition, health is “a state of complete physical, mental, and social well-being and not merely the absence of disease or infirmity.” Health development encompasses all the elements that are necessary for the achievement of such a state of being. In this context, a wide variety of disciplines have some relation to health; specifically, these disciplines include epidemiology, biology, public health and medical science as well as demography, economics, and international health.

In the Millennium Development Goals (MDGs) adopted by the United Nations in 2000 , three of the eight goals are directly related to health (reduction of child mortality, improvement of maternal health , and combat against HIV/AIDS malaria and other diseases). Underlying concern is the vicious cycle of poverty and ill-health in developing countries. Health is not only a result of, but also a contributing factor to, development. Poor people suffer from ill-health; at the same token, people are more likely to fall into poverty because of ill-health. Such vicious cycle of poverty and ill-health places a large burden on developing countries and hinders to development. The purpose of health development is to improve the health of individuals and to control the spread of disease, both of which are essential elements of development and poverty reduction.

Although international concern about health in developing countries is increasing, there is a chronic shortage of resources (financial, human, and material resources) to deal with such issues. The question of how to increase resources remains a major challenge for international aid for developing countries. A further challenge, in the face of limited resources, is how local health services and health systems can be improved and strengthened to provide health services that meet local needs and are accessible, particularly to those living in poverty.

HIV/AIDS - Not just a health and medical problem

AIDS (Acquired Immune Deficiency Syndrome) is a disease resulting from infection by HIV (Human Immunodeficiency Virus). The three primary modes of transmission are sexual contact, blood transfusion, and transmission from a mother to child. Disease symptoms do not appear immediately upon infection (latent period) but after a gradual degradation of an individual's immune system that results in a lowering of the body's ability to defend against disease and ultimately leads to contracting multiple infections and malignancies. This condition is called AIDS.

The disease, which later came to be known as AIDS, began to spread in the early 1980s among gay men in the United States. Today, however, HIV/AIDS has the greatest impact in Sub-Saharan Africa, with women representing more than half of people living with HIV in the region. According to a 2007 estimate, among about 33 million people living with HIV worldwide, more than two thirds (68%) are in Sub-Saharan Africa. Among the Sub-Saharan African countries, Southern African countries including Botswana, Swaziland, and South Africa, which experienced a rapid increase in infection since the 1990's, have been most affected by HIV/AIDS. In recent years, the increased use of intravenous drugs has led to a rapid increase in the infection rate in East and Central Asia as well as Eastern Europe.

HIV/AIDS not only prematurely takes the lives of young, working-age men and women, but also impoverishes surviving dependent family members. This impact is especially serious for children. Children who have lost their parents to AIDS ("AIDS orphans"), or who have to take care of their ill parents, are likely to face serious challenges, including high drop out rates from school and various discrimination throughout their lives. For businesses, HIV/AIDS can lower productivity and contribute significantly to increased labor costs by reducing the size of the labor pool. At the country level, HIV/AIDS may contribute to deterioration of a nation’s financial status by hindering economic growth and by reducing tax revenues, while increasing health care expenditures. In this manner, in countries where it is prevalent, HIV/AIDS can impact the country’s very economic and social foundations. For this reason, HIV/AIDS is an important factor, not only in health and medical research, but also in the study of economics, politics, and social sciences.

HIV/AIDS programs span a wide variety of goals including prevention, testing and counseling, provision of treatment, care and support for people living with HIV, and ending discrimination and stigmatization. HIV/AIDS programs have changed drastically since the development of antiretroviral drugs (ARV) in the mid-1990s. Treatment with a cocktail of different ARVs can keep the amount of HIV in the body at a low level and enable the body’s immune system to recover significantly. However, at the time of their development, treatment with ARVs did not progress rapidly in developing countries due to their high costs. This led to increasing criticism that the high prices were the result of excessive protection of intellectual property rights, which ultimately helped precipitate a revision of the World Trade Organization' s Agreement on Trade-Related Aspects of Intellectual Property Rights (TRIPS). In recent years, due to pressure from developing country governments and advocacy groups formed by people living with HIV and the availability of generic drug alternatives, the price of ARVs has dropped considerably. In addition, the Global Fund to Fight AIDS, Tuberculosis and Malaria (GFATM) was established to facilitate funding of programs focusing on the three major communicable diseases: AIDS, tuberculosis, and malaria. Despite the continuing challenges of insufficient human resources, insecure funding, instability of medical supplies, and the development of drug-resistant strains, there is increasing opportunity in developing countries for antiretroviral treatment.