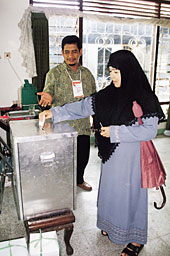 An Indonesian citizen casting her vote in
a presidential election

Political parties and elections play an important role in the analysis of politics in developing countries, particularly in the analysis of democratization, and specifically the consolidation of democratic political regimes. Among political scientists, the existence of free and fair elections on a regular basis is considered the minimal condition for a democracy (democratic regime) (Dahl 1971; Diamond 1999). A political party is defined as a political group that is officially recognized as being part of the electoral process and who can support (put forth) candidates for elections (free or not) on a regular basis (Sartori 1976). In this way, political parties (party system) and elections are used as a measure of the consolidation of a society's democracy. As an external standard, there is a "two-turnover" criterion (Huntington 1991). By this criterion, a democracy may be considered to be consolidated if a party that takes power in an election at the time of transition to a democracy loses a subsequent election (not necessarily immediately following the first election), and if the subsequent ruling party then loses a later election."From a deeper perspective, it is when elections involve the true competition of political parties based on their proposed policies and platforms, and not the popularity of individual political candidates or voting based on special interests, that consolidation of democracy is advanced (Kitschelt 1995; Mainwaring 1999).

On the other hand, even under authoritarian regimes, in many countries political parties exist and elections are held. In many cases, such countries established parliamentary governments directly after gaining independence from colonial powers or after the disintegration of the Soviet Union. Subsequently, although the civilian government was replaced by dictatorships or by military rule after a coup-d'etat, the political institutions including electoral and parliamentary systems, in most cases, were not removed, because elimination of such institutions would significantly damage the legitimacy of the current political administration. Those in power utilize the political party as a vehicle to propagate the regime's ideology among the citizenry and to create a base of political support (Binder 1978). In addition, it is not unusual for the ruling powers to "produce" elections to "demonstrate" that they were chosen by the people, allowing the participation of other political parties under limitations. This also has the effect of dividing moderate and hard-line opposition groups, thereby weakening the entire opposition to the regime (Lust-Okar 2004). However, such illegitimate elections can also trigger mass protests that may even result in regime change, as seen in the cases of the Philippines, Georgia, Ukraine, and Kyrgyzstan.

How, then, do political parties and elections of democracies in developing regions differ from those in the United States and Europe? First, political parties do not have a wide base of support, but rather, tend to appeal to a wide variety of social groups (Özbudun 1987). In election results , it becomes difficult to see how the relations between political parties reflect the interests of and value systems of the societies. Rather, they appear as comprehensive conflicts that can be characterized as establishment vs. anti-establishment or conservative vs. revolutionary. The reasons for this are (1) the absence of a homogeneous working class (Dix 1989), (2) the need for coalition-building due to the large numbers of ethnic, religious, sectarian, and language groups (Mozaffar, Scarritt, and Galaich 2003), (3) the fact that the transition to a multiple-party system was made under universal suffrage (in contrast with the United States and Europe, where suffrage was gradually extended within a multi-party system), each of the emerging parties tries to appeal to all the social groups (Hazama 2006). Secondly, in countries in which a relatively large proportion of the population live in rural areas and are involved in farming, voters are primarily concerned with their regional interests and, therefore, tend to vote for regional parties. In rural areas, political parties promise to bring benefits to the region and thereby garner the overwhelming support of voters in the region. The resulting government comprises a wide variety of political parties each with a few seats, but rather than representing the pluralistic interests and values that span across society, each party tends to represent the individual interests and values of its own region or voting district. As such, on the one hand, the ruling party is made up of a coalition of many regional parties and, on the other hand, the opposition party is made up of parties representing the interests of specific regions (Barkan 2001).