The Company was formed in 1992 to exploit oil reserves in Africa, the Middle East and Russia. It was first listed on the London Stock Exchange in 2008 and moved its head office from Calgary to Jersey also in 2008.

In 1997, the Group became the first oil and gas company to actively explore in Uganda in almost 60 years after being awarded a licence covering the original Block 3 in the Albert Basin of western Uganda. In 2001, the Group farmed out 50% of the licence to Energy Africa, which was subsequently acquired by Tullow Oil.

Block 3A is located in the southern portion of the Albert Basin and covers an area of 2,024 square kilometres. Heritage holds a 50% interest in Block 3A is the operator and drilled two successful appraisal wells during 2008 in this block.

Heritage also holds a 50% interest in and is the operator of Block 1, which was awarded in 2004. Block 1 is located at the northern end of Lake Albert, and encompasses an area of 3,659 square kilometres. A successful 2008 drilling campaign discovered the Warthog accumulation and the Buffalo-Giraffe field, which is considered to be the largest onshore oil discovery in Sub-Saharan Africa in over 20 years.

The exceptional results from recent drilling programmes in Blocks 1 and 3A mean that management now believes that a gross recoverable resource of approximately 600 million barrels has been proved up. This is significantly greater than the threshold considered necessary for major infrastructure development in the Albert Basin.

In 2006/7, Heritage's Kingfisher-1 well in Block 3A produced from four zones at an overall cumulative maximum flow rate of 13,900 bopd. This was followed in 2008 with the Kingfisher-2 well which flowed at an impressive 14,364 bopd from three zones. The equivalent zones in Kingfisher-1 flowed at 9,773 bopd. Heritage announced on 11 December 2008 that the Kingfisher-3 well had encountered oil in all three reservoir intervals with a gross hydrocarbon-bearing interval of 110 metres and net oil pay of up to 40 metres.

The controversial Tony Buckingham is the founder and Chief Executive Officer of Heritage Oil. He was a partner in South African-based mercenary provider Executive Outcomes and with Colonel Tim Spicer, he was one of the leading figures in Sandline International, which provided mercenaries, training and arms that were employed by the government of Papua New Guinea to quell an uprising. Buckingham and Sandline were also involved in the 1990s in shipping arms and personnel to Sierra Leone for a counter coup which restored the elected president Ahmed Tejan Kabbah. 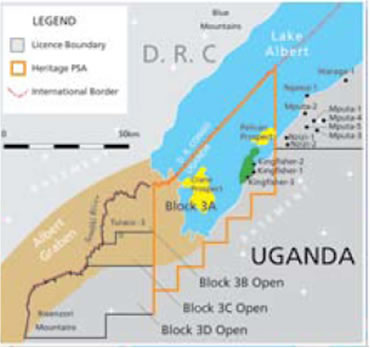 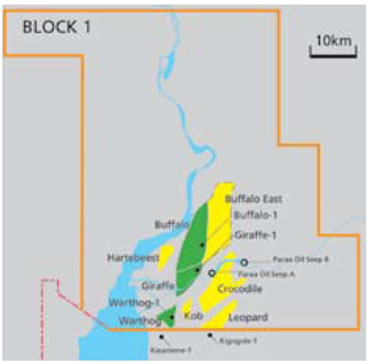 The company is involved in oil and gas exploration, development and production

Heritage is one of only two international oil companies with licences in the vast Albert Basin, which has an area in Uganda of over 9,000 square kilometres. The company’s position in the Albert Basin of Uganda is considered to have the potential to contain over two billion barrels of oil reserves.

Up to now, only 30% of exploration activities in the oil-potential area of western Uganda, stretching from Kanungu to Nebbi, have been completed. Uganda’s total proved oil reserves might reach six billion barrels or more.

“Near term focus on core activity areas of Uganda and Kurdistan, high-impact exploration plays which can transform the Company”

“The Group aims to continue to generate growth in shareholder value by focusing on high-impact international plays that provide multiple targets with the potential to discover substantial hydrocarbon reserves. The Group's growth strategy is to acquire and invest in exploration and early development opportunities throughout the world, with a particular emphasis on its core areas of Africa, the Middle East and Russia. To be successful, the Group has developed a highly effective network of influential industry, political and institutional relationships. These enable the Group to gain access to a wide variety of new oil and gas business opportunities.”

Heritage Oil’s involvement in Uganda reportedly flowed from the gold prospecting of another Buckingham company, Branch Energy, in Karamoja in the 1990s. Branch Energy was owned 40% by General Salim Saleh, the half brother of Museveni. During its tenure in Kaabong, Branch Energy employed a chief geologist who happened to be the young brother of Henry Kajura, then minister in-charge of natural resources.

President Yoweri Museveni approved Heritage’s involvement in exploration in Uganda. According to the Oil and Gas Policy for Uganda, the PSA (which the government has refused to disclose) stipulates a variety of license specific in terms, which have been discussed and agreed upon as part of the contract.

In August 2009 Engineer Hillary Onek, the Energy and Mineral Development Minister reiterated that the revenue Production Sharing Agreements (PSAs) the government signed with various oil companies will remain confidential in order to protect the interests of both Parties. Onek said that government risks being sued if it publicized the document.

Heritage is currently discussing potential options with the government of Uganda for fast-track development and commencement of early production. Options include the possibility of utilising the existing railway network in East Africa for a phased development with the potential for first production in 2011. An export pipeline to the coast is also being considered as well as a scheme to service local markets.

Uganda is also contemplating building a refinery to cut dependence on neighbouring Kenya's ageing refinery. Heritage is working closely with the government to explore the viability of a refinery. Although President Museveni initially favoured a mini-refinery as part of an “Early Production Scheme”, he appeared to have shifted in favour of a full-fledged refinery as more oil was found.

On 13 January 2009, Heritage announced that there were now sufficient reserves discovered in the Albert Basin to exceed the commercial threshold for development. Plans are being developed to drill the offshore prospects in Lake Albert such as Pelican and Crane commencing in 2010. Based on current mapping the Company's initial estimate of reserves for the Buffalo-Giraffe complex is over 400 million barrels. The Buffalo-Giraffe complex may extend further to the north and east and include the Buffalo East prospect, which could create one very large structure of up to 90 square kilometres.

In February 2009, Heritage successfully completed drilling the Kingfisher-3A well in Block 3A, Uganda. The well reached a total measured depth of 2,712 metres (1,875 metres true vertical depth) and has been suspended as a future production well, along with the previously drilled and suspended Kingfisher-1A and Kingfisher-2 wells.

In June 2009 it was announced that Heritage Oil is set to merge with Genel Energy International to create an Anglo-Turkish company that would operate in Uganda and Iraq’s autonomous oil-rich region of Kurdistan. The new firm-Heritage Oil Plc, valued at US$5.5 billion-will result from Heritage Oil’s issuance of 260 million ordinary shares that constitute 100 percent of its share capital, in exchange for acquiring the entire share capital of Genel.

This means that Heritage Oil will own 50 percent of the newly formed company. Heritage Oil Plc will be re-listed on the London Stock Exchange as an international E&P company. According to experts, the move will enable the new company to generate sufficient cashflow to fund exploration of oil and gas in Uganda that had stalled.