ONA is the first private-equity industrial and financial group in Morocco and is a publicly listed company on the Casablanca and Paris stock markets. Approximately 5% of the Casablanca Stock Exchange is represented by the Group’s market capitalisation.

The Group has also signed several strategic agreements: strategic partnership with SEMAFO, a Canadian company specialized in mining; strengthening of the partnership with DANONE for the acquisition of BIMO and LEADERFOOD companies; and a partnership with AUCHAN for the development of modern retail distribution in Morocco (hyper and supermarkets).

Managem , a public listed company produces and sells cobalt, base metals and metal derivatives. It has specialized service companies in exploration, research, development and engineering.

Created in 2002, Mercure.com is an IT holding company. In 2005, Mercure.com concluded a strategic partnership agreement with Bearing Point Group, a world leader in management consulting. Mercure.com also holds a participation of 34% in Involys, a company specializing in the production of software. Created in 1992, Netcom Technology , a subsidiary of Mercure.com, specializes in systems and corporate networks. Created in May 2004, Accolade, another subsidiary of Mercure.com, is a call centre servicing customers of large (mainly European) companies operating in various sectors such as tourism, the Internet and telephony.

CMB Plastique operates in the segment of plastic packaging for the liquid food industry.

Cosumar , a PLC created in 1929, is involved in sugar production, import, transformation, branding and distribution.

Bimo is a market leader in the biscuit industry in Morocco. Bimo has 40 trademarks under 5 different brands.

The first Moroccan Agro-Industrial company, Lesieur Cristal works in two sectors; the triturating of oleaginous seeds, and refining of oils. During 2005, the company diversified its activities in the field of bleaches and products of hygiene and domestic maintenance and is prominent in the field of animal feeds.

Marona operates in deep sea fishing and specializes in selling a wide variety of fish mainly cephalopods. Japan is considered their main export market (mainly for octopus), while the Spanish and Italian (for white fish).

Sopriam is the exclusive distributor of the Peugeot and Citroën car brands, and a market leader in the “new” cars segment in Morocco.

Created in 2002 in partnership with Auchan, Acima introduced the “supermarket proximity” concept into districts of large cities, which was extended to small and average sized cities.

ONA is present in the banking sector through Attijariwafa Bank. Attijariwafa Bank concentrates the majority of its activities in Morocco, but has representative offices in various European countries.

Agma Lahlou Tazi is involved in the insurance business and is an official partner of Marsh, a world leader in risk management consulting and insurance brokerage.

Wana (previously Maroc Connect) is involved in the ICT sector.

Established in January 2005, Nareva specializes in energy, environment and utilities. 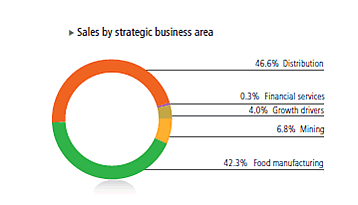 “Our aim is to reach a balance between delivering growth and improving profitability whilst pursuing our social and economic ambitions.”

After years of strong development and diversification, the Group started making strategic changes between 1995 and 1997 by refocusing its business activities. The group’s objective was to capitalize on competitive advantages and foster growth. ONA emphasizes productivity, quality and innovation whilst making every effort to mobilise both financial and high-calibre human resources to be able to satisfy demand and seize opportunities. The Group’s investment strategy is based on the principle of majority ownership whilst retaining management control. A hands-on management approach underpins this strategy aimed at developing a stable portfolio over the long-term. The Group aims to generate sustainable growth over the long-term from its traditional businesses (food manufacturing and mining), services sectors (distribution and financial services), as well as from new activities with strong growth potential (growth drivers).

ONA Holding bases its model on the following: maximise each subsidiary’s return on invested capital and ensure the profitable growth of the Group’s various activities; ensure an optimal allocation of capital, whilst taking into consideration the overall risk-reward profile; validate the strategy and monitor the performance and risks of its subsidiaries; encourage synergies between subsidiaries; provide support and expertise to its subsidiaries (legal, tax-related, financial communications, etc).

ONA’s “Synergies” and “Risk Management” projects are vitally important for the Group’s development. Both these functions have a common objective, that of value-creation. The Synergies programme endeavours to match resources to skills whilst the Risk Management programme is aimed at improving risk control and decision-making.

The Synergies programme, which was launched in 2005 by the Development and Synergies division, has resulted in a corporate culture founded on best practice. Other projects have been launched aimed at generating sustainable cost savings and exploring new areas for potential synergies.

Risk management, for which the holding company’s General Control division is responsible, is one of the key functions of the Group. The aim is to progressively put in place a global risk management system for all the Group’s subsidiaries. This system identifies and manages risks, improves decision-making processes and allocation of resources and provides support for implementing corporate strategy. The Risk Management system manages both risks relating to the external environment (external factors that may affect the viability of a subsidiary’s business model), risks relating to the business model itself (operational, HR, organisational, ethical and IT-related risks) and risks relating to the accuracy and relevance of information as the basis for taking strategic and operational decisions.

The company is controlled by the Moroccan royal family, and it enjoys preferential treatment, privileges and sometimes even state-protected monopoly in many vital economic sectors of the country.

Emaar Properties, the largest real estate developer in the world in terms of market capitalisation and ONA Group entered into a joint venture to create large scale residential and golfing development projects throughout Morocco. The first project is Amelkis II-a luxury residential golfing complex in Marrakech.