Will the world become homogenous? Or perhaps… 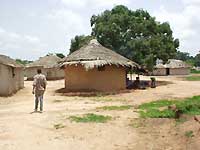 Village on the outskirts of Guiglo City

The word "globalization" has been widely promulgated to refer to aspects of development mostly from an economic perspective; to describe the increasing flow across borders of labor, capital, goods and services, and the formation of international production networks as represented in multinational enterprises, for example. Since the 1990s, however, the term has been picked up by scholars from a wide variety of disciplines, such as sociology, political science, anthropology and cultural studies. Its use is no longer limited to economics and the term has spurred debate in various areas of study.

This point of debate can actually be wide-ranging in reach. By way of example, if we look at the table of contents in Global Sociology (Cohen and Kennedy 2000), which is regarded a textbook on globalization, the following chapter headings appear: Modernity; The Changing World of Work; Nation States; Global Inequalities: Gender, Race and Class; TNCs, Uneven Development; Failures of Global Control; Asia Pacific; Population Pressures and Migration; Tourism; Consuming Culture; Media and Communication; Urban Life; Social Movements; Challenges to a Gendered World; The Green Movement; and Identities and Belonging. These chapters might surprise those whose specialties are not in sociology. Here, we find that the word “globalization” is not used in a limited sense to refer to a particular matter (e.g. “the globalization of finance”). Common views among those who take a sociological stance are: “All the dimensions of globalization - economic, technological, political, social and cultural - appear to be coming together at the same time, each reinforcing and magnifying the impact of the others” (Cohen and Kennedy); and “globalization is best thought of as a multidimensional set of social processes that resists being confined to any single thematic framework” (Steger 2005).

The focal point here, then, is that as opposed to a specific phenomenon that can be differentiated from another, globalization is the comprehensive transformational process itself, which is complex in its progression in the modern world. In this sense, globalization in sociology strongly possesses the character of broader questioning from a critical standpoint, regarding the issue, "What kind of period is this modern age?"

How can regional studies focused on developing countries be linked to knowledge from globalization studies? As demonstrated by the use of the term “McDonaldization” as a keyword in explaining globalization, it is sometimes pointed out to culturally homogenize the world and to be a process that creates a flat plane, free of obstructions, for the capitalism of leading developed countries. If we adopt this perspective, the history of developing countries will likely be portrayed as a process of being “hit by the wave of globalization.” In fact, it is often submitted that globalization has brought about problems in developing countries such as poverty, and this can be said to be the dominant viewpoint today.

On the other hand, there also some who submit that with globalization, the processes of "homogenization and heterogenization" occur at the same time (e.g. Appadurai 2004). This approach provides a more critical lead in terms of investigating the dynamic nature of developing countries. From the political and economic spheres (market economy, small government, democratization) to consumer culture (software such as music and movies, products and food culture introduced by multinational agribusinesses, mobile phones), this flow of events that can be observed practically anywhere in the world is entering developing countries. In reality, however, how politics, economics and daily living function in developing countries and what people think about these issues are not level across the world in any way. Instead, transformations are often underway that have never been seen elsewhere before, a result of stimulation from newly introduced flow processes. (Democracy is a typical example of this, in that while countries implement the same system of representative democracy, there is great variation in how democracy functions in the different countries.) For regional studies focusing on developing countries, it is a valuable frame of reference to focus on the unique and peculiar things that emerge through close links with the rest of the world, rather than those that emerge from being separate from it. It is likely that using this perspective, regional studies looking into the peculiarities of different countries will be able to break the mold of narrow, one-country research and present wider findings.