"Education for all people of the world: No house in the village forgotten, no one left out"*1 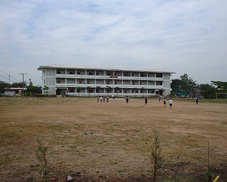 The first approach, which was more common from the 1960s to 1980s, considers people to be a human resource, mainly expressed in terms of number of people (population), for quantity, and education level, for quality. In regards to economic development in developing countries, awareness of the lack of intermediate level engineers and high-level manpower increased, and this prompted interest in secondary, technical and higher education. The manpower theory*2 was an expression of this awareness and efforts to respond to it, providing a technical ground and procedures for educational planning. In the meanwhile, human investment theory dealt with education as an investment into humans, and debated its effects and characteristics theoretically and empirically in various settings. Originating from Schultz and Becker's works*3, this theory has seen tremendous development over the years and gained a firm footing in economics. 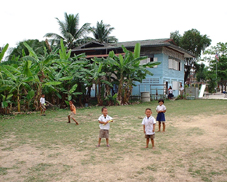 The back courtyard of an elementary school
in Ayutthaya (Thailand)

The second approach mentioned above emerged immediately after the Second World War, but became recognized in the 1970s as the "basic needs approach," asserted in the context of international aid and development. Further, in the 1990s, as education has become an important theme in terms of development and poverty alleviation, the second approach has become a major approach in supporting development strategy and goals today, although it does not have a proper theoretical nucleus. It includes many research tendencies that share the assertion that it is not economic but human development which we should ultimately pursue, reflecting a consensus attained through experiences in development to date. For this approach elementary education for all citizens plays an important role in development and must be the first step taken. Although Sen does not refer directly to the central role of education, his capability approach*4 can represent a powerful theoretical support for it.

An international movement "Education For All", began in 1990, and the promotion of elementary education was reaffirmed by the establishment of the UN Millennium Goals in 2000. With this, there has been more research done than ever before dealing with how to promote the spread of education, how to raise educational standards, and how to measure and evaluate the effects of educational policies and programs. This is where the economic and statistical techniques developed under the first approach play a valuable role*5. Expectations are high regarding education’s effects on poverty alleviation or broader social effects on such topics as the gender gap and empowerment, but research directly verifying such effects is still lacking.

Under both approaches, which deal mainly with government policies and actions and making policy recommendations, it is often assumed that government policies and actions are "independent variables": government acts or can act, without major interference, according to its own will or technical criteria which recommendations require. However, this is not true. Therefore, in order to obtain a realistic wider perspective, we need to extend our study scope to cover interactions between actors and their international settings. A historical approach with a comparative view will also clarify the characteristics of developing countries’ education development. Yonemura (ed. 2007)*6 attempts to pursue this direction. Studies in the field of comparative education that deal with developing countries have also been on the rise recently, offering valuable points from this perspective.


*1
Paraphrased from Japan’s Order to Promote Education, which was published in 1872 during the early years of the Meiji Restoration along with the promulgation of the Education Code. The original statement was "Education for all people: No house in the village forgotten, no one left out."