I happened to be in Yangon on the election day for a business purpose. I had a chance to observe how things were going in Yangon on that day. The weather was clear that Sunday, which seemed to me like a perfect day for a family outing in the town, but the city was much quieter than the ordinary Sunday. I saw smaller crowds and fewer cars, and many of the shopping centers were closed on what would have been a good day for brisk business. I heard that some people found it difficult to come to the city from the suburbs, with smaller number of route buses and mini-trucks – vehicles that carry passengers on a converted platform - in operation. Rumors of a bomb explosion could have been another reason why people chose to stay at home. 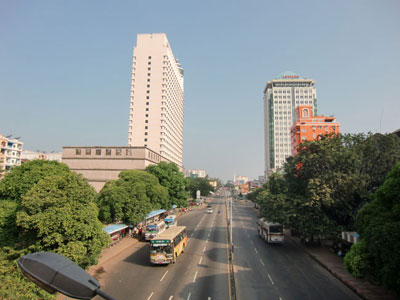 On the voting day in Yangon, traffic and pedestrians were sparse on this normally busy main street
(Just before 9 a.m. on November 7, 2010, photographed by the author).

I learned that factories at many of the industrial zones located in the outskirts of Yangon were banned from operating on this day off. An extra polling station was set up at one industrial park for employees staying in dormitories adjacent to the factories away from home. The manager of the industrial park, who is Japanese, told me he was not going out to watch the voting because the presence of a foreigner on the polling day would not be good. The military government shunned the entry of foreign journalists for the elections. The internet was cut off starting a few days earlier until late afternoon of the polling day. In view of such conditions, he thought a foreigner loitering around the polling station could bring trouble.

The polls were open from 6 a.m. to 4 p.m. I was planning to meet a Burmese friend of mine for a breakfast at 6 a.m. at the hotel where I was staying. When I met him, he said he wanted to go voting before breakfast, so we walked to a polling station located at a school, which was about a ten-minute walk from the hotel. Being a foreigner, I felt somewhat nervous, but I waited outside the school gate for about 15 minutes while my friend voted. The polling station was filled with quite a large number of voters despite it being so early in the morning, at just after six.

Many have said that citizens of Myanmar had little interest in the elections this time around. People were indifferent toward the elections that virtually ensured the victory of the USDP, a party that enjoys the full backing of the military government, and a ballot that lacked the NLD, the largest opposition party, led by Aung San Suu Kyi. In fact, many of my friends told me they were not going to vote. After having seen good turnout at this polling station, however, I had the feeling that the voting rate might be higher than expected, although this is based purely on my observation of just one polling station. A friend of mine who went to vote at 2 p.m., two hours before the polls closed, told me that some 70-80 percent of the voter registry had already been signed (according to the rules, voters, after arriving at the polling station, must sign the voter registry to receive the ballot papers). After 2 p.m., a vehicle with large speakers patrolled the streets, blaring announcements that called on voters to cast a vote.

The voter turnout was one indicator used to predict the success of the elections. The military regime attempted to prove the validity of the elections by attaining a high turnout rate. The NLD, on the other hand, called for a virtual election boycott, saying voters had the right to vote and the right not to vote. This gave rise to the notion of equating a high turnout with a military government victory, and a low turnout with a NLD triumph. It was believed that the level of voter turnout would influence the political activities of the NLD and Aung San Suu Kyi after her release.