Institute of Developing Economies>Research Activities>Region >Asia >Asia Column Results of the 2010 Elections in Myanmar: An Analysis (1) Overview of the Elections (January 2011)

(1) Overview of the Elections

On November 7, 2010, the elections were held in Myanmar after an interval of twenty years. This was the second elections held under the present military government. In the last elections in 1990, the National League for Democracy (NLD), led by Aung San Suu Kyi, won a landslide victory by capturing more than 80 percent of all seats. In contrast, the National Unity Party (NUP), the renamed one from the former ruling Burma Socialist Program Party (BSPP), suffered a crushing defeat, winning merely 2 percent of the seats despite a virtual backing of the military government at that time. After the 1990 elections, the military government refused to hand over power, claiming that a new constitution would need to be written prior to convening a parliament. The new constitution had been discussed for more than fourteen years, and was approved in May 2008 by referendum. The 2010 elections were held based on the 2008 Constitution.

The NLD, however, decided on March 29, 2010 to boycott the elections on the grounds that the 2008 Constitution was undemocratic, and that Aung San Suu Kyi, who was serving her one-and-half-year-long term, must be expelled from the NLD under the Political Parties Registration Law, among other reasons. The military government nonetheless took steady steps in preparation for the elections, closing candidate registration on August 30 and finalizing a review by the Union Election Commission (UEC) on September 10. Following an undeclared campaigning period, the elections were held on November 7, Sunday.

The UEC announced all election results by November 18, with the military government-backed Union Solidarity and Development Party (USDP) winning a “resounding victory,” as many had predicted. Being angered with the results, pro-democracy parties, ethnic minority parties, and even the NUP, a party that had been seen as pro-junta, tried to object to the election results, citing allegations of voting fraud. As it stands, however, no objection has been submitted due to the slim chances of overturning the results and the fee for filing a complaint to UEC, which runs up to 1 million kyats (about 1,000 US dollars) per submission ( *1 ) . Also, major opposition parties have not yet gone so far as to dismiss the election results and reject participating at the parliaments.

There is little doubt that the elections were shrewdly plotted to work to the advantage of the USDP, which enjoys the full backing of the current military government. Critics have pointed to a series of irregularities, suspicious acts and “mobilization” of the electorate during the campaign period and polling time. A closer look at the election results, however, sheds light on “unexpected” outcomes in addition to “expected” results. It is unpredicted outcomes, in my opinion, that reveal the real voices of citizens and illuminates issues relevant in the politics of the country.

In this series on the 2010 elections in Myanmar, the author would like to see the election results from this perspective. The first report, i.e. this report, provides an overview of the election system and contests. The second report of the series presents the election results. In addition to the predicted “victory” by the USDP, the author tries to see some unpredicted results such as relatively strong voters’ supports for a pro-democracy party in Yangon and for ethnic minority parties in their own states. The third report of the series examines the impact of the election results on the bicameral national legislature and 14 regional and state legislatures. The first parliamentary session is scheduled to be held in February 2011. In conclusion, the author mentions some tasks that the newly “elected” government will face.

According to the UEC, a total of 3069 candidates including 82 independent candidates ran in the elections (refer to the bottom line of Table 2). However, the UEC had not released a consolidated list of nationwide candidates. Thus, the party-wise figures in Table 2 are based on the author’s information, compiled from various sources such as party pamphlets, journals (*3) , and interviews. Although the aggregated numbers from party-wise figures are slightly different from those of the UEC, the gaps are reasonably small. On the numbers on party-wise candidates, the figures of Table 2 are used in this paper.

When the UEC initiated the party registration processes, there were 10 existent parties that participated at the 1990 elections. However, five of them, including the NLD, did not apply for political party registration before the prescribed deadline, and as a result, were ordered to dissolve. The NLD boycotted the 2010 elections, protesting that the 2008 Constitution was undemocratic and that the election-related laws were designed to expel Aung San Suu Kyi and other political prisoners from the party.

In the end, 47 organizations, including five existent political parties, filed applications for establishment and/or registration with the UEC. The UEC approved the establishment and/or registration of 42 political parties. Applicants not permitted to found a political party included three ethnic minority parties, i.e., the Kachin State Progressive Party (KSPP), Northern Shan State Progressive Party and United Democracy Party (Kachin State), because of the government’s suspicion of their connections with ethnic armed groups. For instance, Dr. Tu Ja, Chairman of the KSPP, was former Vice Chairman of the Kachin Independence Organization (KIO). Since April 2009, the Myanmar army has demanded the ethnic ceasefire groups to transform into the Border Guard Forces (BGFs), which are under the command of the Myanmar army. Most of major ceasefires groups have rejected their demand, and the KIO and its army, the Kachin Independence Army (KIA), categorically refused to be a BGF. After having their party registration turned down, some of their leaders attempted to run for the elections as independents, only to find their applications rejected once again by the UEC.

(Note) 1) "Burmese" parties include those with no ethnic color. 13 parties are Burmese (or with no ethnic color) and 24 are ethnic minority parties.
(Source) Compiled from the UEC notifications, pamphlets of political parties, and various media reports.

The election developed into a contest between three main blocs: the military government-backed USDP; pro-democracy and ethnic minority parties that challenge the military government; and the NUP which tried to find a way to establish a third force. Following the NLD’s boycott of the elections, pro-democracy forces were confined to smaller, lesser-known parties with limited organizational capabilities. In stark contrast to the USDP and NUP, which fielded 1112 and 995 candidates around the country, respectively, the National Democratic Force (NDF), a group that splintered from the NLD, managed to field only 162 candidates. The Democratic Party (Myanmar) fielded 47 candidates, including the daughter of former Prime Minister U Nu, one of the so-called “Three Princesses.”

Among ethnic minority parties, the Shan Nationalities Democratic Party (SNDP) fielded 156 candidates. SNDP Chairman Sai Ai Pao is the former chairman of the Shan Nationalities League for Democracy (SNLD), the second largest winner in the 1990 elections after the NLD. Widely known as “White Tiger” from the party logo, the SNDP has been popular in Shan State.

The USDP had advantages in terms of money and organizational capacity. The USDP is a political party whose parent body is a mass social organization called the Union Solidarity and Development Association (USDA). The USDA has 15,000 offices around the country and 24 million members, equivalent to approximately 40 percent of the population. The party cadres and members include the incumbent Prime Minister Thein Sein as chairman, the incumbent Minister for Agriculture and Irrigation as secretary general, General (retired) Shwe Mann, former Chief of General Staff (Army, Navy, Air) as member, and General (retired) Thiha Thura Tin Aung Myint Oo, the incumbent Secretary 1 of the State Peace and Development Council (SPDC) as member.

The USDP used their financial and organizational muscle to turn the election campaign in their favor. For instance, the USDA, the USDP’s parent body, constructed and repaired neighborhood roads in local communities in hopes of gaining the support of residents. As shown in the photograph below, a stone post next to this recently-paved road features the lion logo, symbol for the USDA/USDP. The stone post says the road was paved under the arrangement of the USDA between March 21 and April 9, 2010. Similar small-scale development projects by the USDA were common in various parts of the country. In a blatant demonstration of the organization’s election strategies, some development projects were suspended half-way, only to be resumed after the election of a USDP candidate. 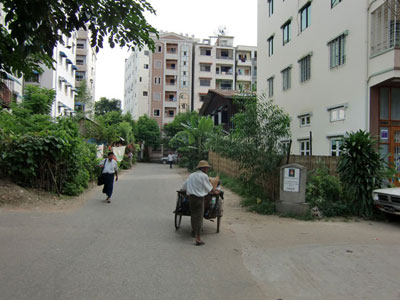 A neighborhood road in Yangon (November 3, 2010, photographed by the author)

The author found, however, that the USDA/USDP is widely viewed by Myanmar citizens as a puppet organization and political party for the military regime, and is essentially unpopular with the people despite its large membership. Had the NLD participated in the elections, chances could have been rather high that voters would have voted for the party, even with Aung San Suu Kyi under house arrest. Although these conditions resemble those of the 1990 elections, with Aung San Suu Kyi under house arrest at that time too, the NLD won a landslide against the NUP. In reality, the absence of the NLD in the 2010 elections left the pro-democracy forces with small and unknown parties only, which lacked the organizational capacity and funding to field candidates around the country to compete against the USDP.

Moreover, the NLD called on voters for a virtual boycott, saying voters had the right to vote and the right not to vote. This gesture could have served to reduce the number of votes that would have gone to pro-democracy parties. These conditions were convenient for the USDP. While the elections ended in a “landslide victory” for the USDP, the poll results for the NDF in Yangon provide a glimpse of persistent support for pro-democracy parties among the voters. If the conditions were slightly different, the pro-democracy parties could have done much better. This point will be discussed in the second report of the series.

It was the NUP that might have staged an ambush in the elections this time around. Still, voters regarded the NUP, successor of the BSPP, was responsible for the economic and social decline during the twenty-six-year-long “Burmese Way to Socialism” period led by Ne Win. People still disliked the BSPP and Ne Win. The NUP is yet to express sincere remorse or apology over its failure. In this way, the NUP was also essentially unpopular with people, and unlike the USDP, they had no organizational or financial capability to mobilize voters. After suffering a demoralizing defeat at the hands of the NLD in the 1990 elections, the NUP was trounced this time by the USDP.

(*1) The per capita GDP of Myanmar was about 400 US dollars in Fiscal Year 2007.
(*2) In addition to elected representatives, a quarter of the seats in each legislature are allotted uncontested to military representatives directly appointed by the Commander-in-Chief of the Myanmar military.
(*3) For instance, see Yangon Media Group [2010].