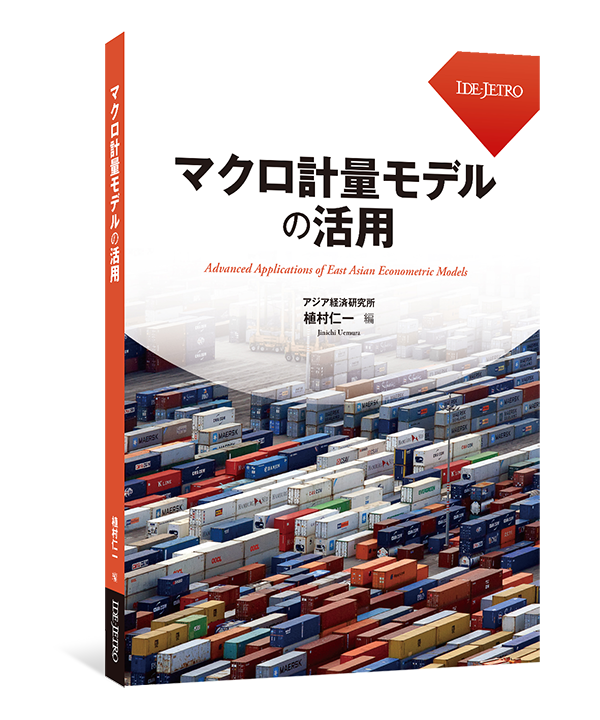 Available in EPUB and PDF format for full book. EPUB files can be opened in eBook readers.

This publication is the final report of the study group on advanced applications of East Asian econometric models at the Institute of Developing Economies (FY 2019-21), which follows The Foundation and Practical Use of East Asian Econometric Models (2018) and East Asian Econometric Models: Use and Application (2020). It provides readers who have a general understanding of the content of the two previous publications with explanations on macroeconometric models and on applied general equilibrium (AGE) models and vector autoregressive (VAR) models, which complement, or are used in combination with, macroeconometric models, and thereby contributes to utilization of economic models in investigations of various phenomena.

Chapter 4 Relationships between FDI, Export, and GDP: A Case Study of Vietnam

This book is the final report of the study group on advanced applications of East Asian econometric models at the Institute of Developing Economies (FY 2019-21) and is a sequel to The Foundation and Practical Use of East Asian Econometric Models and East Asian Econometric Models: Use and Application, which were edited by Jinichi Uemura and were published by the Institute of Developing Economies in 2018 and 2020, respectively. The target readers are wide spreads of readers with basic (intermediate university level) knowledge of economics, statistics, and econometrics who may be able to follow the content of the two previous publications or use, to some extent, macroeconometric models and other practical economic models as tools. Though the book is entitled Advanced Applications of East Asian Econometric Models to maintain consistency with the name of the study group and the titles of the previous publications, it also covers applied general equilibrium (AGE) models and vector autoregressive (VAR) models which complement, or are used in combination with, macroeconometric models. The book is intended to contribute to the utilization of economic models in investigations of various economic issues by discussing advantages, disadvantages, and other characteristics of these three types of models.

The book is structured as follows.

Chapter 1, "An Introduction to Economic Simulation Models" (Jinichi Uemura, Kazuhiko Oyamada, and Vu Tuan Khai), discusses the necessity of analytical tools in the field of macroeconomics, in which controlled experiments are not feasible in general, and outlines advantages, disadvantages, and other characteristics of the three types of practical models considered in this book.

Chapter 2, "Macroeconometric Models as Experimental Tools" (Jinichi Uemura), explains the design of macroeconometric simulation experiments, examines the case of Malaysia with a single-country model, performs a scenario experiment to check the necessary attributes of the model. It concludes, after additional experiments, that government fiscal stimuli should be rather small and long-lasting than large and one-time. Also, on utilizing the trade linkage model of East Asian region, the chapter puts some different trade patterns in which China, Taiwan, and the United States could participate in the Comprehensive and Progressive Agreement for Trans-Pacific Partnership (CPTPP) and measures effects on different groups (advanced economies, early participants of ASEAN, and the CLMV countries) in each pattern. Some scenarios are also considered and are analyzed with different model in Chapter 3 (Kazuhiko Oyamada).

Chapter 3, "Simulation Experiments with Dynamic Applied General Equilibrium Models: Economic Effects of China, Taiwan, and the United States Participating in the CPTPP" (Kazuhiko Oyamada), considers, similarly to Chapter 2, cases where China, Taiwan, and the United States participate in the CPTPP separately and simultaneously, reports the results of simulation experiments conducted with an AGE model that was developed to complement the macroeconometric trade linkage model of East Asian region, and points out relevant issues. The results of the experiments imply that U.S. participation in the CPTPP would lead to Vietnam facing capital constraints due to insufficient investments and being unable to maximize gains from trade and show that welfare improves in Vietnam only when Taiwan and the United States simultaneously participate in the CPTPP.

Chapter 4, "Relationships between FDI Exports and GDP: A Case Study of Vietnam" (Vu Tuan Khai) investigates how foreign direct investment (FDI) inflows affect the recipient country's GDP and exports, using a VAR model (a major tool in empirical analysis in modern macroeconomics), and data from East Asian countries. The first half of the chapter provides an overview of the process of developing laws related to receiving FDI, the macroeconomic conditions, and the situations involving international trade and FDI inflows in Vietnam over the past several decades. The latter half is provided an analysis of the aforementioned research question, which is based on VAR with sign restriction—a framework that is suited for examining dynamic and interdependent relationships between FDI and exports and between FDI and GDP. The results of the analysis show that, in the cases of Vietnam, Thailand, and Malaysia, FDI is significantly and positively associated with GDP not only in the short run, but also in the medium to long run; that, in the case of Thailand, FDI has a greater effect on the real economy than portfolio investment; that, quantitatively, the FDI multiplier is about 0.7 to 2.4 in the short run and is about 3.5 to 11.4 in the long run; that the FDI multiplier varies from one country to another; that the FDI multiplier for Vietnam is smaller than those for Thailand and Malaysia; and that the differences in the FDI multiplier are larger in the medium to long run.