The contemplation of 21st-century globalization with 20th-century intellectual frameworks is leading governments to make all sorts of policy mistakes. It’s thus time to rethink. Globalization has conventionally been believed to develop through a “single process” in which trade costs are reduced, national borders are opened, and economies are gradually integrated and grow together. However, this is a mistake. In fact, globalization consists of two processes, not one.

The development of globalization has been constrained by three requisite conditions: 1) cheap transport systems, 2) the coordination of different production processes, and 3) face-to-face communication. As the barrier in 1) was significantly lowered with the invention of the steam engine, industrial clusters were formed in each region. Then, the development of ICT (information and communication technology) helped reduce the barrier in 2) and made it technically possible to separate the production process into several processes at low cost. Technology that had been used only in advanced countries flowed across borders, and as a result, the growth of the share of G7 countries in the global GDP took a downward turn in the mid-1980s, while the output of other regions sharply increased.

In terms of policy, these changes were different in that the consequences of 1) were controlled with the gradual reduction of tariffs, while those of the ICT revolution in 2) are uncontrollable and less predictable. GATT is a system that was established at the time when the world was simpler. Today, in order to deal with the much more complex global economy, it is necessary to reorganize trade disciplines and change the form of trade governance. What is needed for the new governance is to connect production bases in order to expedite communication, transport services, and business, and to reconsider the existence of state-owned enterprises from the perspective of property rights, freedom from labor exploitation, and competition policies. Changes in GVCs also require changes in development policy. It is an important point for developing countries to recognize that “industrialization” has a less significant meaning. 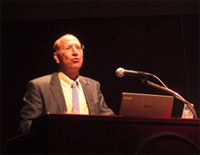