Unsecured small-scale credit for the poor

Inside a Grameen Bank center

Microcredit is a financial service for the poor in which small loans are provided to poor people without collateral. In 2006, The Grameen Bank and its founder and President, Mohammad Yunus, who has endeavored to spread the idea of microcredit, won the Nobel Peace Prize. When he first started out, there were many who expressed skepticism over advancing credit to the poor, saying that even if poor people borrowed money to engage in business, they would make little profit and the debts would simply pile up. Based, however, on the belief that poor people also have entrepreneurial abilities and that if they only had the money they could start a business and make a profit, and by adopting a variety of innovative schemes, Yunus was successful in building up a bank that served poor people, who generally have a high repayment rate. Beginning from this success of the Grameen Bank, similar microcredit institutes have been established all over the world, and the provision of credit to the poor has come to be implemented much more actively. In recent years, microcredit has come to cover not only credit, but also a wide range of finance elements such as savings and insurance, and so it is now general for the term “microfinance” to be used. 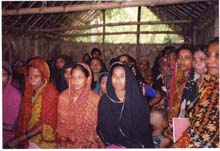 The Comilla District center of the Grameen Bank, Bangladesh

The secret of success is groups of five people?
One of the novel schemes of the Grameen Bank that has been noted is the group-based lending system. Under this system, as an alternative to securing collateral from poor people, groups of five people are formed, such that if one person becomes unable to repay a loan then the bank will no longer extend credit to any members of that group. The following positive effects are anticipated from having the borrowers form a group:

However, recent research has called the group-based credit approach into question. An experiment was carried out in the Philippines, where a group-based credit center chosen at random was converted to individual-based lending. The result was that the change to credit for individuals made no difference to the repayment rate and individual loans led to more new customers. The vast majority of these new customers were friends and relatives of existing customers. In the case of group-based lending, if a member defaults then others have to take on the burden of repayment, and so people are cautious about forming a group with people they are very intimate with. In the case of individual credit, however, there is no such problem and thus it is easier to recommend a loan to acquaintances, resulting in an increase in new customers. The research finding was thus that the group-lending approach does not contribute to high repayment rates and furthermore exerts a drag on the entry of new customers.

In research using repayment data from Thailand, it has been found that default is high when group responsibility is strong. Despite the expectation of positive effects from the points 1 to 3 above, why is it that group lending reduces repayment rates? One reason might be that even if one does not make the payments then the other members will, and so this may result in the occurrence of the problem of a “free rider” problem. This result was borne out by the results of experiments I carried out in field work in Vietnam, where “free riders” occurred more frequently in group-based lending than with individual-based loans. It is also probably true to say that one’s incentive to work hard would fall if one found oneself in the position of working very hard to pay off other people’s loans.

Recent research findings thus suggest that group lending does not have a great deal to support it. What is most revealing is that the Grameen Bank itself abandoned the group-lending system in 2002. The Economist cites the following reasons, which appear to have a relation to the research findings mentioned above.

If the effectiveness of group-lending was called into question, then what were the factors that brought about the success of the Grameen Bank in the first place? Recent research findings suggest that the following factors can be pointed to: (1) The “dynamic incentive” theory, which suggests that the inability to access cheap credit in the future if the loan is not repaid is a strong incentive to repay. (2) The “frequent small repayments” theory, which suggests that by having members make repayments a little at a time, at a pace of once per week to once per month, when small sums of money have accrued and before wasteful spending occurs, is effective in the early identification of problem borrowers and makes possible the implementation of appropriate support activities before it becomes too late. (3) The “in public” theory, which says that making repayments one by one in front of everyone else at the center is a strong incentive. (4) The “lender effort” theory, which says that efforts such as gathering information concerning the defaulting borrower from her partners and carrying out detailed investigations of the household budget situation were very effective.

It would be dangerous for someone who did not know about these recent trends to set up a microfinance system by requesting that borrowers form groups and go ahead with a group-based lending system without giving it very much thought. Certainly there have been many institutes that have been successful by adopting a group-lending approach, but in the background to the success of group-lending efforts has been the existence of institutions and communities that are supportive of group lending. My own research, mentioned above, shows that group lending gives rise to “free riders,” but also that repayment rates are improved by appropriate social sanctions and mutual reporting systems, and by the introduction of voluntary group formation. Further research is necessary to ascertain what kind of lending mechanism, whether group lending or individual lending, can function most effectively.

Further, as the number of microfinance institutes increases, it becomes possible to borrow from one institute before repayments to another lender are completed. The “dynamic incentive” mentioned above will thus not take effect, and repayment rates will fall. Since profits will also fall as repayment rates drop, support for the poor will further decrease. In order to avoid this situation, there is a need for information on borrowers to be shared between microfinance institutes in order to establish a system that makes it impossible for a defaulting customer to borrow from another institute. The construction of such information sharing systems is now progressing in several developing countries.

Has microfinance reduced poverty?
A large number of microfinance initiatives have been implemented all over the world with the aim of poverty reduction, but how much has, in fact, microfinance contributed to the reduction of poverty and an increase in the incomes and wealth of the poor?
The following kind of statement is often seen:

Unfortunately, it is not correct. The $50 increase may have come from regional economic development or from an increase in earnings due to an accumulation of experience. In other words, it is possible that income would have risen even if there had been no microfinance.

So how can we make this kind of comparison?

“The borrower’s income rose by $50, but the income of a person who did not borrow any money rose by $20. Thus, microfinance had a $30 effect.”

Since both development of the regional economy and an accumulation of experience could have had similar effects on both the person borrowing and the person not borrowing, it would appear that the effect of microfinance has been calculated correctly. However, this is still not correct.

There is a high possibility that the person who borrowed money was a person with a keen sense of business who had a plan for a business that would make good profits if only she had some money, while the person who did not borrow money was a person with little flair for business who would not do well even if she were able to take out a loan to start a business. Even if the person with the business skills who took out a loan had not actually borrowed any money she might have seen a greater rise in income than the person without business skills. Thus there is a high probability that, in the case that neither person received credit, the rise in income of the person who borrowed and the person who did not borrow would have been totally different, and thus we cannot measure the effect of microfinance by comparing the two people. (For more details, see the article by Seiro Ito.)

While there has been very little research carried out to solve these problems and measure the effect of microfinance, research using data from Thailand was not able to find any evidence that microfinance contributes to an increase in wealth. Further, evidence has been found to show that people who received microfinance loans were also highly likely to borrow money from loan sharks. This finding suggests that, since under microfinance if repayments are made then it becomes possible to borrow again, when the due date for payment arrives money is borrowed from a loan shark to make the repayment to the microfinance institute, the person then immediately receiving new credit from the microfinance institute to pay back the loan shark. My own research in Vietnam shows that in fact on the morning of the due date for repayments people were borrowing money from loan sharks and taking it to the bank, where they would make the repayment and then immediately receive new credit, which they would then use to repay the loan shark in the evening. It may be that in fact behind the surprisingly high repayment rates of microfinance institutions all over the world is a fair amount of this kind of borrowing from moneylenders occurring.
In recent years, some researchers have tried to estimate the impact of microcredit by utilizing randomized experiments in which they opened branches of microcredit institutions in randomly chosen areas or provided loans to randomly selected applicants. The result so far is that there is no evidence that microcredit improved per capita household expenditures and that microcredit had little, if any, impact on household incomes.

Why is it that the effect of microfinance is not as high as expected? It would seem that microfinance would provide a possibility for people with ability but no access to funding to greatly increase their incomes. However, there is no guarantee of immediate success from simply lending money to people who have no particular technique for making money even if they had access to credit. There is probably a need to teach money-making skills to people so that they will be able to use the borrowed money well.

It is often said that you should “give a man a fishing rod rather than give him a fish,” meaning that assistance should be given to people for achieving independence rather than just as temporary aid. The idea of microfinance is exactly the same as providing a fishing rod to a person who does not have one. Having given the fishing rod, however, if you do not teach the person who was not able to use a fishing rod well in the first place how to use it to good effect, she or he will not be able to catch any fish.