"Seeking Compatibility between Economic Growth and Social Justice : Focusing on the Experiences of The New Brazil"

In Brazil, as the middle class grows, the numbers of poor and extremely poor are shrinking. As a result, Brazil’s Gini coefficient has fallen sharply over the past 15 years, though it is still at a high level internationally speaking. The 4 main reasons for these positive changes are: jobs growth (and rising wages, particularly for unskilled laborers); demographic changes (including female participation in the workforce); drastic rises in the legal minimum wage; and the government’s income distribution policies. A glance at contribution rates to the improvement in Latin American income inequality reveals the major factors to be rising hourly wage rates at 45% and income transfers at 14%. In Brazil in particular, the rate for the former stands at 54.9% and for the latter at 12.2%.

Government initiatives to decrease poverty levels and income inequality include: the promotion of macroeconomic stability through curbs on inflation and so on; improving public access to education and healthcare; and the construction of a social safety net through the Conditional Cash Transfer program (hereinafter CCT) and so on. The CCT dates back to the Cardoso administration. It was expanded by the Lula administration, through the Bolsa Familia (family allowance) program, which added allowances for food and the like. It was recognized that the money spent on this program also had a significant spillover effect.
The program’s budget stands at around 0.4% of GDP, but spillovers include: a boost to entrepreneurialism (the consumption patterns of the poor and the middle class are different, so new business chances are brought about by raising the poor to the ranks of the middle class); a decrease in urban youth crime; a cap on underage pregnancies; a decline in AIDS cases; and an increase in the resilience of the poor to shocks such as soaring food prices.

Problems include the negative impact on competitiveness. In other words, though rising incomes leads to growing demand, the prices of non-tradable items like services have gone up, which leads to rising costs on the supply side. Furthermore, rising wages have led to declining labor productivity and subsequently to a slide in industry competitiveness. Horizontal initiatives are needed to tackle these issues, such as improvements to the business environment and the promotion of investment that utilizes private-sector funds. In other words, the Brazilian growth strategy which focuses on expansion of domestic consumption is reaching the end of its shelf life and a new model will need to be devised in the near future. 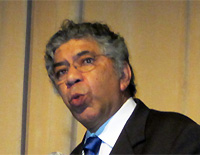 Keynote Speech 2: Recent Developments and Trends in the Brazilian Economy

An analysis of economic growth from 2004 to 2010 reveals three major factors. The first involves the government of Luiz Inácio Lula da Silva. When the Lula administration came to power in 2003, there were doubts about whether the new left-wing administration would maintain the policies of its predecessors. As a result, the foreign exchange markets and other financial indicators suffered sharp falls. In the end, though, Lula decided to stick with the policies of the previous Cardoso administration and adopted a conservative approach to fiscal and monetary policy. As a result, trust in Brazil recovered. The second factor was the advantageous external environment at the time, with the global economy expanding and commodity prices rising, for example. The third factor involved structural reforms within Brazil, such as the pension reforms and salary-deductible loans.

The driving forces of GDP growth were the services industry on the supply side and consumer spending on the demand side. Exports had pulled the economy along until 2005 but lost momentum thereafter. Factors behind the growth in consumer spending include: labor reforms (expansion of full-time work); a hiking of the legal minimum wage; the Bolsa Familia program ; and increased financing. The external environment deteriorated after the 2008 Lehman Shock. As an economic crisis engulfed the world, the Brazilian government responded by ramping up spending and public investment. In the face of rising inflation, though, the government has been trying to curb spending since 2010. Furthermore, despite the government’s industrial policy and aggressive financing by public financial institutions, growth began stalling from 2011 onwards. This shows that the consumer-driven economic growth model has now reached its limits. This is partly because household debt ratios are rising. On the supply side, meanwhile, production costs are rising due to inflation and so on, so suppliers are finding it harder to meet demand. While productivity declines in Brazil, the recovery in the external environment also remains lackluster.

Brazil is now facing some structural issues. The first is the problem of labor productivity. In the 2000s, the labor productivity growth rate was low and it has actually fallen since 2011 . This is mainly due to a slump in Total Factor Productivity (TFP; productivity derived from technological advances and improvements in productive efficiency rather than a quantitative increase in labor or capital). In addition, investment (particularly public investment) has been slowing since 2011. Investment and saving rates are also accounting for a smaller share of GDP, so dependency on external funds is growing. As well as the issue of workforce quality (or education in other words), Brazil faces considerable fiscal problems too. Social security costs may balloon as the demographic dividend period comes to an end and the population ages (the dependent population ratio is set to rise from 2020). As a result, the deficit could expand from hereon 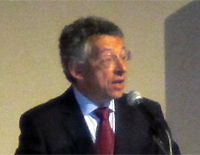 Keynote Speech 3: Silver Jubilee of the Citizen Constitution: Evidences and Challenges of the Newer Brazil

Mauricio Soares Bugarin
(Professor of Economics at the University of Brasília)

The 1988 Constitution of the Federative Republic of Brazil was drafted by the 1988 Constituent Assembly after more than 20 years of military rule. As a result, it is deeply colored by Brazil’s traumatic experiences under an authoritarian system. This explains why the constitution strongly champions freedoms of speech, religion and political beliefs, for example. It also contains safeguards protecting citizens from arbitrary action by the state. Furthermore, it establishes important social rights such as the right to education, public health and social security. These characteristics explain why the document is known as the “Citizen Constitution.” The constitution set down the rules for political battles from thereon. It also established an extremely important basis for other systematic changes such as: the establishment of a Public Ministry , which was established under the 1988 constitution); voted to slash the infrastructure budget for the World Cup; and approved a resolution decreeing that any profits from “sub-salt” oil fields be used solely for spending on education and healthcare. Judging from past examples, it seems these demonstrations occurred during a historically important moment in Brazil’s history.

There is no consensus about the nature of the recent demonstrations, but I will now introduce you to several different interpretations. Firstly, after studying street protests in Latin America, Machado, Scartascini and Tommasi argued in a 2011 paper that “where institutions are strong, actors are more likely to participate in the political process through institutionalized arenas, while where they are weak, protests and other unconventional means of participation become more appealing.” In other words, if citizens harbor doubts about the effectiveness of the system and political representation in particular, they will take to the streets to try to affect change, just like they did in Brazil. Secondly, in a paper published earlier in 2011, ex-president Cardoso explained the social short circuit theory that says that in society, as in electrical systems, an electrical wire that loses its insulation may generate an unexpected short circuit any moment, but the short circuit is, in fact, a consequence of long-lasting careless maintenance of the electric system.. Thirdly, Francis Fukuyama calls Brazil’s protests a “middle-class revolution.” He analyses the protests as a manifestation of a more general phenomena spreading across the world. His argument goes as follows. New middle-classes have started to appear in several nations. Members of this class are highly educated and have high expectations with regards to the government and ethical behavior. They are also passionate about the establishment of citizenship . However, many members of Brazil’s burgeoning middle class are in a weak position and could easily fall back into poverty. As such, they tend to react very angrily to price rises. The recent demonstrations were the result of swelling expectations among these new middle classes for effective and ethical public policy conduct, together with the government’s inability to meet these expectations.

In conclusion, despite criticisms, I think Presidents Cardoso, Lula and Dilma Rousseff have made great steps in tackling Brazil’s problems. From here on, though, the government will need to tread more carefully when choosing policies. Higher incomes and better education have led to a new type of citizen, one with higher demands when it comes to public goods. The emergence of the new middle class is imposing a new challenge on the Brazil’s leaders. They now need to lead the country from the “New Brazil” to the “Newer Brazil." 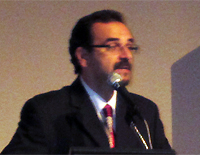 Mauricio Soares Bugarin
(Professor of Economics at
the University of Brasília)