Institute of Developing Economies>Seminars & Events >Library>Seminar: "What can we learn from field research on water problems? -- Author Talk: Interactive Approaches to Water Governance in Asia"

Seminar: "What can we learn from field research on water problems?--Author Talk: Interactive Approaches to Water Governance in Asia" 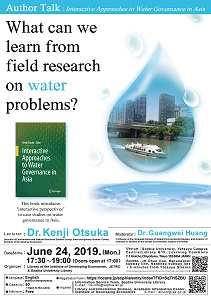 This book introduces interactive perspectives, which have been discussed mainly in the context of Western European countries, to case studies on water governance in Asia. It examines how these perspectives reveal complex and dynamic interactions in water governance in Asia and how interactions between policies and practices as well as interactions between formal institutes and emerging informal institutes are occurred. Through our case studies in Asia (from Japan, China, Thailand, the Philippines, Indonesia, and India), the book reveals there are emerging interactive forms in Asia under hierarchical but fragmented administrative system, although water resource and environmental management is still occupied with governmental sectors. Also, it should be noted that hybrid forms of interactive governance including governmental and non-governmental actors have been emerging and under such forms the expected role of government as well as non-governmental actors could be changed in more cooperative way to solve the problems. In such forms, researchers outside the locality could play an important role to facilitate such a form of interactive governance.

This book is a major result of the two year research project on "Interactive Approaches to Water Governance: Case Studies in Asia" conducted at the Institute of Developing Economies, Japan External Trade Organization (IDE-JETRO), from the fiscal year of 2015/16 to 2016/17.

Library of the Institute of Developing Economies, JETRO, and Sophia University Library