The 2015 Myanmar General Election: A Historic Victory for the National League for Democracy

The National League for Democracy (NLD), won the second general elections under Myanmar’s current constitution (adopted in 2008), which were held on November 8, 2015. The Union Parliament (Pyidaungsu Hluttaw) composed of a lower house (Pyithu Hluttaw) and an upper house (Amyotha Hluttaw) ended its five-year term, and, except for the seats nominated by the Commander-in-Chief of the Defence Services, three-quarters of the seats were up for a vote in the general election 1 . As a result, the NLD holds 135 of the 224 seats in the upper house and 255 of 440 seats in the lower house (as of this writing). Both of these results were a major victory, with the party forming a majority by itself in the parliament. On the other hand, the ruling Union Solidarity and Development Party (USDP) won 11 seats in the upper house and 30 seats in the lower house, which gave a total of 41 seats in both houses, a significant reduction from its 342 seats before the election (see Table 1) 2 .

Table 1. Number of Seats Won by Each Party 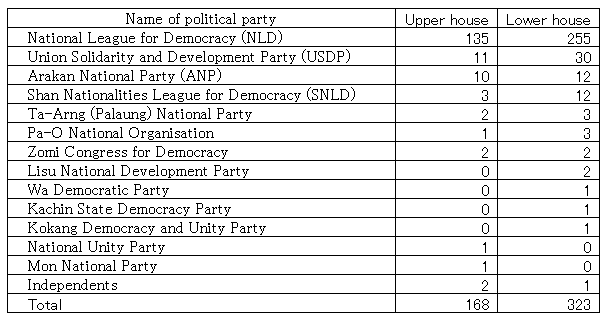 Source: Compiled by the author based on announcements from the Union Election Commission (http://uecmyanmar.org/)

The election campaign was effectively a duel between the USDP and the NLD. Before the election, it had been said that if free and fair elections were held, it would be advantageous to the NLD, partly because the NLD had won 43 out the 45 seats contested in the 2012 by-elections. Nevertheless, such a landslide might have caught many people by surprise. The number of seats won by the NLD forms a simple majority in the parliament to be convened on February 1, 2016, even when the military lawmakers nominated by the Commander-in-Chief of the Defence Services are included.

Why did the NLD Win a Landslide?

Analyzing the behavior of voters and exploring the reasons for the NLD victory based on data is no easy task in a country with very few polls, but simply by making a comprehensive assessment from a variety of information, it may be possible to identify the five points below as reasons for the victory.

Firstly, there is the overwhelming popularity of Aung San Suu Kyi. To begin with, her father, General Aung San, is the national hero of Myanmar’s struggle for independence, and his prestige has no doubt underpinned her popularity. Moreover, the fact that she did not give in to the military government even under house arrest for a total of more than 15 years since 1989 for the sake of Myanmar’s democratization has made her hard to replace. Her popularity has not waned even though the military government blocked freedom of speech about the democratization forces and criticized them for many years. Myanmar boasts the second largest land area in Southeast Asia, is home to diverse ethnic groups, and still has a small middle class with large differences between social classes. That the NLD was able to gain support that bridged these differences to a considerable degree is solely due to her charisma.

Secondly, there is the revitalization of the NLD’s party organization. The NLD’s party organization had grown weak during the prolonged crackdown by the military government. The 2012 by-elections revived it. The party organization continued to grow after its victory in those elections (200,000 party members as of 2014 according to the party leadership), it held a party conference in March 2013 and set up party branches in all the districts and townships nationwide. Going into 2015, the party maintained its steady activities in anticipation of the general elections, including holding events in cities across Myanmar to commemorate the 100th anniversary of the birth of General Aung San. The people responsible for the party’s activities, including the leaders, are, as a rule, unpaid. The election campaign held while the volunteers were feeling their way made it possible for the party forces to expand into villages, and the 60-day long campaign also helped.

Thirdly, there is the weakness of the ruling USDP. The Union Solidarity and Development Association (USDA), the mass mobilization organization of the military regime, was reorganized into a political party prior to the 2010 elections. Moreover, at the time of the reorganization, many generals, including the current President Thein Sein, moved sideways into leadership posts. In particular, it has neither a shared philosophy nor a strong social support base. Furthermore, the party inherited the negative image of the military regime that had held power since 1962.

It seems likely that the five years of the Thein Sein administration was too short a time to change the weakness of USDP party organization and its negative image. Yet, during the election campaign, the party stressed the results of the five years of reforms in addition to sometimes joining with the government in attempting to gather votes by providing favors including rural finance, improvements of infrastructure such as electricity and roads, and offering consumer goods. However, it was not enough to win the election campaign. Many incumbent ministers lost in the election, which made the USDP’s weakness as an organization clear.

Fourthly, the effect of the election system also provided a tailwind for the NLD. In general terms, the high degree of non-proportionality is attributed to the effect of the first-past-the-post system on the election results. A high degree of non-proportionality refers to the tendency for parties that receive a high number of votes to be over-represented in the number of seats. Conversely, parties with a low percentage of votes won tend to be under-represented in terms of the number of seats. This tendency was clearly apparent in these elections in Myanmar.

Table 2. Percentages of the Vote and Seats Won by the NLD and USDP

Source: Compiled by the author based on announcements from the Union Election Commission.

Fifthly, there is the poor performance of the ethnic minority parties. Although the election campaign was a duel between the NLD and the USDP when viewed on a national level, candidates from ethnic minority parties were prominent in states 3 where ethnic minorities account for the majority. Amid reports of the NLD’s dominance in regions where there are many of the Bamar people, it was impossible to read voting trends in ethnic minority areas. In the end, the Shan Nationalities League for Democracy (SNLD) and the Arakan National Party (ANP) won many seats in Shan State in the northeast and Arakan State in the west, respectively.

The SNLD won 3 seats in the upper house and 12 seats in the lower house. It has a long history as a political party having participated in the 1990 general elections as well, but it did not take part in the 2010 general elections. On the other hand, the Shan Nationalities Democratic Party (SNDP), which garnered votes in the 2010 general elections, lost all of the 21 seats it had held in both houses. In Rakhine State, there were also two leading political parties—the Rakhine Nationalities Development Party (RNDP) and the Arakan League for Democracy (ALD) bearing the name of the Rakhine (Arakan) ethnic group—but they agreed to merge into the Arakan National Party (ANP) in 2013. The party garnered votes widely in northern Rakhine State, gaining 10 seats in the upper house and 12 seats in the lower house. This was the largest number of seats won by an ethnic minority party. The ANP increased its number of seats slightly, since the RNDP won 16 seats in the 2010 election. This was probably due to its success in gathering the votes of Rakhine people due to the integration of the main political parties 4 . These were the only two of the seven ethnic minority states where ethnic political parties gained a considerable number of votes, and the NLD kept ethnic minority parties in check in most of the constituencies in the remaining states (Kachin State, Chin State, Kayin State, Kayah State, and Mon State) to win a majority of the seats.

However, the NLD was particularly strong in the regions, gaining a majority of the vote share in hardly any states. The general view is that this can be explained by differences in voting behavior as a result of ethnic divisions. However, there are also large disparities between the regions and the states in terms of economic development and education, and the relationship between these factors and voting behavior is not yet fully understood. Therefore, at present, caution may be needed in explaining the voting results purely in terms of ethnic factors (Table 3). 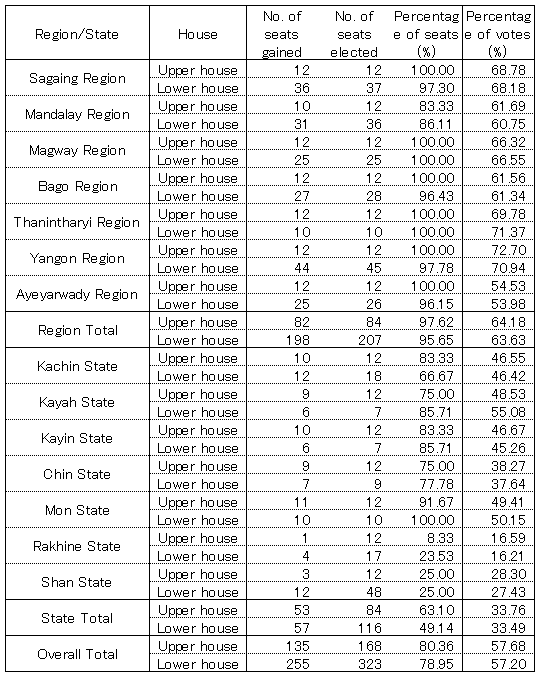 Source: Compiled by the author based on announcements from the Union Election Commission.
Note: The eight constituencies for the Lower House in the Naypyidaw Union Territory are included in the count for Mandalay Region.

Future of the NLD Government

On November 9, the day after the vote, Aung San Suu Kyi addressed supporters gathered at party headquarters stating, “Victory or failure, that is not important. What is important is how we win or lose. Those who lose should bravely concede, while those who win should humbly celebrate the victory. That is a true democracy.” In addition to conveying the margin of the victory, this was a strategic move aimed at a peaceful transfer of power and avoiding post-election turmoil.

While the NLD also won a resounding victory in the 1990 general elections, the military government of the time refused to recognize the results. From this experience, Aung San Suu Kyi’s caution about achieving a transfer of power is understandable because the military had mostly been in charge of running the nation since the military coup d’état in 1962, and this was about to change for the first time in half a century. For now, the President and the Commander-in-Chief of the Defence Services have guaranteed a peaceful transfer of power to the NLD, and it is unlikely that turmoil will occur. The NLD government is expected to be established after the parliament is convened in February following the election of the President and the Vice-President and the formation of a cabinet.

However, it is still unclear how the NLD government will be constituted after that and how the government will be run due to the concerns about the very transfer of power to the party that won the general elections. Even the party leadership, which had been striving for electoral victory, may not have a concrete image of government administration. Aung San Suu Kyi caused a stir by stating, “I will be above the president” and “I’ll run the government” at press conferences before the election, but, leaving aside the rights and wrongs of that, if she is actually involved in running the government from a position that is not that of president, through what kind of mechanisms will she exert influence on the President? Moreover, what kind of changes will there be from the policies of the previous administration once the NLD forms government? What kind of compromises will the government make with the military on constitutional reform? Will its diplomacy be more pro-Western? All of these issues are uncertain. A little more time will be required to predict the future of government administration.