Beauty Pageants are much loved in the Philippines. In the year 2011 alone, Filipinos rallied around the participation of their country’s representatives in a total of four different global pageants. The results of these contests are as follows:

The Miss Universe pageant, which took place in September 2011, received a great deal of attention in the Philippines due in part to the fact that the competition was the first such global contest to take place that year. Domestic media focused closely upon the contest, whose Filipino representative was a talented graduate from the University of the Philippines College of Architecture. I was on the university campus on the day of the contest, and saw some students and staffs gathered around televisions to watch the contest. They screamed excitedly every time the Filipino contestant advanced to the next level, remaining extremely enthusiastic even when she placed fourth rather than emerging as the top winner. I would like to add that the reaction of the media to this competition result may have been that of typical English speaking countries, wherein she was strongly praised for being the only contestant among the top five to be able to answer questions in English without the aid of an interpreter.

Another reason for the close focus upon the Miss Universe pageant in the Philippines—as well as the country’s excitement with regard to the results—was that the Filipino contestant had come in fifth place the previous year in 2010. With one success coming on the heels of another, the 2011 contestant who placed fourth ended up coming home to a welcome that would have been befitting of a first-place winner, including an extremely showy parade in her honor.

The Filipino contestants also placed within the winning ranks in the Miss World and Miss International global pageants that followed, with the country’s contestant at the Miss Earth pageant (held at the University of the Philippines Theater) coming in third place. She was also a graduate from the university, and the domestic Filipino media—in addition to having closely covered each of these contests—ended the year with a splashy focus upon the “recognition by the rest of the world for the beauty and intelligence of Filipino women.”

A Country with a Small Gender Gap

The Philippines is truly recognized for an additional distinguished ranking with regard to its women. According to the Global Gender Gap Index released each year by the World Economic Forum (WEF), the country ranked 8th in 2011 among a total of 135 nations. In other words, the Philippines had only the eighth smallest gender gap amongst all of the nations surveyed. The survey covers several different areas including economic participation, political empowerment, educational attainment, and health and survival. In fact, the Philippines placed 9th in 2009 and 2010, and 6th in 2006, 2007 and 2008, meaning that it ranked within the top ten nations each of these years. Placing above the Philippines were mainly northern European countries, and the Asian nations trailing the Philippines were Sri Lanka, which came in 31st place; and Mongolia, at 36th. For our information, Japan ranked 98th. It goes without saying, then, that the Philippines is the hands-down Asian leader in this regard.

It is impossible to refute the fact that women in the Philippines play an extremely active role. It is a matter of course for women in the country to assume managerial roles in governmental and business fields, and the same holds true in the political sphere, with two past female presidents. Anyone reading this piece who has ever visited the Philippines will most certainly come away with an impression regarding this matter. Women also lead within the educational field, with 2007 population census figures revealing that 56% of academic degree holders in the nation are female.

in fact supported by the labor of other women. Specifically speaking, the households of women in the work force are mostly maintained by the work of female domestic workers, or helpers. In other words, women are enabled to participate in business and polirics due precisely to the existence of this cheap source of labor that exists in their country. With few employment opportunities in rural regions, many women seek jobs in the larger cities—many of which involve precisely this type of domestic work. Many urban upper-class families employ several live-in employees, each of whom are tasked with different functions including babysitting, cleaning, washing, cooking, etc. Even middle-class families with stay-at-home housewives often hire one or two live-in helpers to assist with household tasks. It is no exaggeration, then, to state that homes with a mother who regularly works outside are able to function precisely due to the existence of such helpers. With these women assisting with cooking duties in addition to cleaning and washing, not only by live-in but also by part-time basis, the reality in the Philippines represents a luxury that working Japanese women could only dream of.

This situation is also reflected in the country’s labor statistics. The chart below shows the number of workers by occupational field, which is further broken down by gender. These figures make it clear that female workers are polarized into two separate categories: Officials, Managers and professionals on the one hand; and unskilled laborers (including domestic workers) on the other. Surveys shows, moreover, that most of those in the latter category are often not even paid the minimum daily wages as stipulated by law.

In this way, then, we see that the social advancement of “beautiful and intelligent” Filipino women is in fact supported by the labor of other women—and that the country’s high gender equality rankings are most seemingly accompanied by a gross disparity that exists between women themselves. 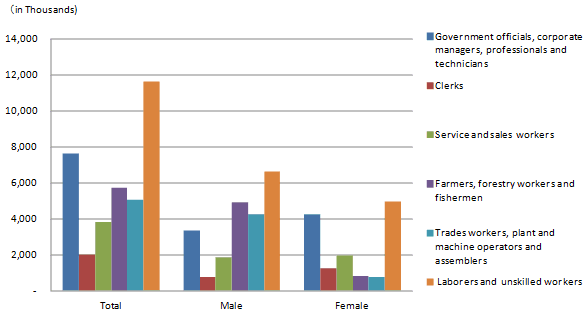