Balance of Power in Legislatures

What impact would the results of the elections have on the workings of the Legislatures, the first regular session of which is scheduled to be held on January 31, 2011? In the Union Legislature (the People’s Legislature and the National Legislature) and the Region and State Legislatures (seven regions and seven states), one quarter of the seats are assigned to military representatives appointed by the Commander-in-Chief, in addition to representatives elected in the elections.

shows the balance of power in the Legislatures after taking the above conditions into account. Although the USDP scored a “landslide victory” overall, the differences in legislative composition are expected to reshape the way how the Legislatures are run.

First, following its “landslide victory,” the USDP obtained a majority in both houses of the Union Legislature, even after military representatives that occupy one quarter of all seats are included in the count. This means that the USDP now has the power to make decisions on the election of president on its own, without the cooperation of military representatives.

Accordingly, the president is in theory able to take action independent of the intentions of military representatives. The popular belief today is that the USDP is more or less synonymous with the Myanmar army. In reality, however, the USDP embraces a relatively wide range of members, from businessmen to lawyers, scholars, and local celebrity, so their ideas and interests are not completely aligned with those of the army. The USDP’s “landslide victory” in the elections may serve to expand the party’s autonomy. 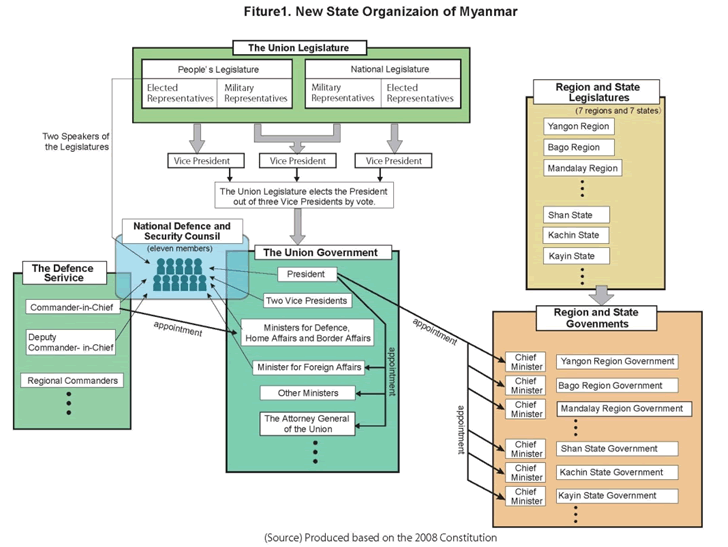 Second, the USDP, in combination with military representatives, holds more than three quarters of all seats in the Union Legislature. If they work together, the two parties will have the authority to make important decisions such as constitutional amendments and changes in regional and state borders. Also, if their seat total equals or exceeds two thirds of all seats, they will have the power to impeach the President. There is a possibility that a president may not follow the intent of the USDP or military in governing the country after he/she assumes office, as being a parliamentary member or military personnel is not a qualification for becoming a presidential candidate. Even if such situations were to arise, the USDP has the power to discharge the President, provided that it can get military representatives to cooperate.

Third, the elections gave rise to mixed situations in the Region and State Legislatures. The USDP enjoys a majority in the seven Region Legislatures. Combined with seats held by military representatives, their seats exceed three quarters of the total, a situation that resembles that of the Union Legislature.

However, the USDP was not able to secure a majority in the State Legislatures with the exception of Kayah State. The ruling party is not under any imminent threat of a predicament because they constitute a majority when their seats are combined with those of military representatives. Still, their combined seats would not exceed three quarters of the total, the mark that grants the ability to impeach a Chief Minister, head of the Region and State Governments.

Although a multi-party democracy may be a possibility in the State Legislatures, the “landslide victory” by the USDP remains firmly in place in the Union Legislature and the Region Legislatures, casting doubt on the chances of democratic discussions in those Legislatures. This is why most people in the international community, notably in the United States (US) and the European Union (EU), see the elections as a mere ploy to “legitimize” the army’s power.

For this reason, an examination of the upcoming political course in Myanmar should be focused primarily on the new government - the President in particular - rather than the Union Legislature. The President will be elected in the first regular session of the Union Legislature, which must be convened within 105 days after the elections. What is important is that the power currently held only by the 77-year old Senior General Than Shwe, Commander-in-Chief of the Defence Services and Chairman of the State Peace and Development Council (SPDC), the highest decision-making body, will in the future be shared between the two persons, i.e., the President and the Commander-in-Chief.

At least in peacetime, however, the Commander-in-Chief will not intervene directly in the national politics, as the duty of day-to-day administration will be relegated to the President. The important questions in the examination of the post-election political milieu in Myanmar include: Who will be president? What ideas will the new president have, and what will he/she do? Although this is no more than speculation, the USDP’s “landslide victory” is thought to have heightened the possibility of an USDP cadre, possibly Thura Shwe Mann, former Joint Chief of Staff of the Army, Navy and Air Forces, assuming the presidency.

Subsequently, the new president will then form a cabinet. The newly organized cabinet is expected to include many incumbent ministers and retired army officers because the majority of the current ministers, including Prime Minister Thein Sein, along with high-ranking army officers who retired immediately before the elections, ran in the elections as USDP candidates and all of them were elected. Such officers include Thura Shwe Mann, and Thiha Thura Tin Aung Myint Oo, former Quartermaster- General and First Secretary of the SPDC. When the new administration is inaugurated, the administrative authority will be handed over from the SPDC, thus completing the transition of power to a “civilian” government.

Another important point is the likelihood of a generational change among the military leaders. Senior General Than Shwe, who has served as Commander-in-Chief of the Defence Services since 1992, is rumored to retire along with 73-year old Vice Senior General Maung Aye. Although not confirmed, it is reported that a decision has been made to make Lieutenant-General Thura Myint Aung, Adjutant-General, the new Commander-in-Chief and Lieutenant-General Ko Ko, Chief of the Bureau of Special Operation 3, Deputy Commander-in-Chief. These two generals, both in their mid-fifties, are younger than their predecessors by more than 20 years. How will a new generation of military leaders define the role of the military in the new political system? The answer may drastically change a political landscape in Myanmar.

Conclusion – Challenges of the New Government

Twenty-two years after the 1988 coup, Myanmar is at last witnessing a transition from the military regime to a “disciplined” democracy. Representatives from pro-democracy and ethnic minority parties will sit, albeit in a limited manner, in the Union Legislature and the Region and State Legislatures established after the 2010 elections. Also, a “civilian” president will be installed, although the post is likely to be occupied by a retired general. The Commander-in-Chief will continue to influence the Union Government through various constitutional provisions and political institutions, but will not be engaged in routine affairs of the state.

It should be noted, however, that the inauguration of a new political system and new government will not automatically bring peace and improved living conditions to the country and people. There are quite a number of factors that could add to political uncertainty: a possible confrontation between the new government and released Aung San Suu Kyi who boycotted the elections, which is expected to occur outside the Legislatures; the mounting risk of military clashes between the Myanmar army and ethnic armed groups; and the yet unknown governing ability of the USDP.