Economies without Growth for 20 Years: A Common Bond between Japan and Africa

Despite its decline, Japan, the world’s third largest economy and a country of advanced technological prowess, should not be mentioned in the same breath as Africa’s economies, which stagnate at the bottom of the pyramid in the world—or so one may think. However, of all the economies in the world, the Japanese economy and African economies have one thing in common: an arrest in growth for 20 years.

The regional GDP of Sub-Saharan Africa in nominal dollars had seen almost no growth from 1981 to 2002. The average yearly growth rate never reached 1 percent. Meanwhile, Japan has not recovered at all from the Heisei recession, which began in 1991. As of 2011, its GDP hovers around 5 trillion dollar or 500 trillion yen. While many countries have experienced a “lost decade” of long-term stagnancy in economic growth, it is extremely rare that it lasts for over 20 years. As a result, a generation that has not experienced economic growth in Africa and Japan is now responsible for their societies’ direction.

In the case of Sub-Saharan Africa, its population multiplied during the 20 years of absent growth. As a result, per capita GDP was reduced roughly by half. Profound long-term poverty set. Development economics today took shape and advanced academically as economists analyzed the unprecedented situation of a further decline in income in an already poor region. The phenomenon of a serious stagnation in production value even as the population—and thus the labor force—grows is not easy to explain. There must be some powerful causes at work to stall economic growth. For development economists, Sub-Saharan Africa’s impoverishment was, so to speak, a “natural experiment” they could not have imagined. Oxford University’s Paul Collier described it as “a gold mine to economists”. We researchers in this field have been competing to dig this gold mine to search for factors that hold back the economic growth of Sub-Saharan Africa.

If you think about it, Japan has been in an economic slump for 20 years now. For the Japanese, Africa’s story is no longer remote. If the findings of development economics are universal, then the causes suppressing growth in Africa that we have discovered can be applied to explain Japan’s economic stagnation.

One cause raised by many scholars around the world for Sub-Saharan Africa’s economic malaise is its “landlockedness”. The African continent has over 50 countries, and so it has the most landlocked countries of all the regions in the world. Because those countries do not touch the sea, they do not have ports, making trade inconvenient and dragging down their economic growth rate. Of course, this explanation does not apply to Japan.

Another theory is the “black market premium”. Because mistakes in monetary policy should hold back investments, the idea is to measure the difference between public exchange rates and the black market exchange rates. However, this theory does not fit Japan’s situation. Many papers have also sought to study the assumption that it must be a low level of education that hinders economic growth. This factor does not concern Japan either. Tribal divisions and social conflicts are also unknown to Japan.

Growth regression analysis, the methodology that studies the causal relationship between such factors mentioned above and the economic growth rates, is itself under a cloud of doubt as to whether its arguments have been correct. Because the African economy experienced a boom that began in 2003, the validity of many of the ideas that have been developed concerning Africa must be examined again, at least as they concern the GDP growth rate.

Of the factors economists have discussed affecting economic growth, there is one that applies to Japan: “openness”. In their paper, Sachs and Warner argue that the degree of exposure to international markets determines the rate of economic growth (Jeffrey Sachs and Andrew Warner, “Sources of Slow Growth in African Economies,” Journal of African Economies, Vol. 6 No. 3, Oxford University Press, 1997). The share of foreign trade (export plus import) in GDP of Sub-Saharan Africa after the 1980s fell to the 40 percent level and persisted there. Sachs and Warner argue that this was a result of mistakes in trade policies, and demonstrate that there was a significant relationship between the degree of foreign trade and per capita GDP.

Another cause for Japan’s economic stagnation may be the loss of “demographic bonus.” The graph below shows the working-age population (age 15-64) as a percentage of total population. The graph includes estimated values for South Korea after 2010 provided by the Korean Statistical Information Service. As can be seen from the graph, Japan’s figures show two peaks, in 1968 and 1992. Demographic bonus is reaped during the period when the ratio of the working-age population increases. Japan’s period from 1950 until the peak of the first mountain reflects its period of rapid economic growth. The period after the second peak corresponds to the Heisei recession. 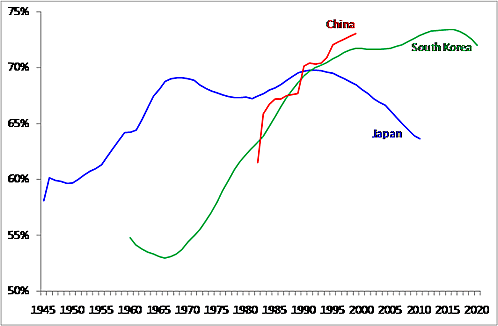 Paul Krugman has argued that labor input was the driving force behind East Asia’s economic growth; technological input contributed little (Paul Krugman, “The Myth of Asian Miracle,” Foreign Affairs, Vol. 73, 1994). This article attracted a great deal of controversy, but Krugman’s assertion is believed to be correct when it comes to the stall of the Japanese economy. Krugman’s argument is not a show of contempt for the significance of East Asia’s economy. Of all developing countries, only East Asia’s export-led economic growth achieved full employment. It was economic growth that consumed the labor force of those nations. Furthermore, because the energy of those countries’ people, their greatest asset, was thrown into production, increasing it, only in East Asia was gains in growth heavily distributed to workers, equalizing income distribution.

However, if a labor force capable of input begins to decrease, this growth pattern will also decline. In Japan’s case, because the country has little exposure to international markets, the drop in domestic demand as a result of population loss is a direct hit on Japanese industries.

The loss of demographic bonus is not a phenomenon endemic only to Japan. As shown in the graph above, South Korea’s ratio of working-age population is expected to shrink beginning in 2016. Experts believe China will reach its peak in the working-age population in 2015. If the same phenomenon that took place in Japan also occurs in the two countries, East Asia’s prosperity is headed for a finale in five years.

The aging society casts a pall over East Asia. I believe that the half century of knowledge accumulated by development economics, including the range of population theories, will be beneficial for the revitalization of Japan.